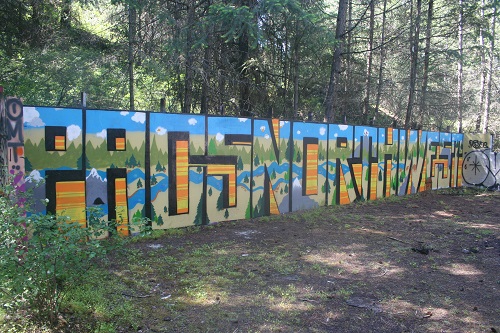 When was the last time a landscape spoke to you? Were you marveling at the fields of balsamroot in Riverside State Park? Holding your breath as you pedaled over a trestle on the Hiawatha Trail? Gazing out over Lake Pend Oreille from the top of Scotchman Peak? Or were you standing in front of a cement wall that was covered in spray paint?

Unsurprisingly, both public art (that is, art that has the support of local governments and businesses) and graffiti art exist in the urban centers of the Inland Northwest. In Sandpoint, the alley between Cedar and Main streets displays a city block’s worth of colorful artwork. Murals on the sides of buildings and inside underpasses brighten several areas in Spokane and Coeur d’Alene. A few years ago, Coeur d’Alene artists painted their visions on life-sized moose statues while Spokane artists painted their own visions on life-sized Kodiak bear statues. And now, the arts commissions of both cities are sponsoring a project to beautify the signal boxes and utility boxes along major arterials with local artists’ designs. 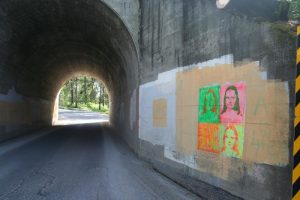 Graffiti, like its fancy fine arts cousins, is wildly varied and widely respected in some groups. Banksy, the elusive and subversive graffiti artist based in England, has stated that “a wall has always been the best place to publish your work.” And while most public art projects are limited to locations in more densely populated areas, outdoor adventurers often discover graffiti that adds amusement, commentary, or beauty to an already pleasant foray off the beaten path or waterway. Art in the wild is as fun to journey toward as it is to finally behold, and while some examples can be seen by car, you’re more likely to appreciate their scale and the effort it took someone to create them if you search by foot or bike. Add the pieces below to your next tour of our beautiful Inland Northwest urban outdoors.