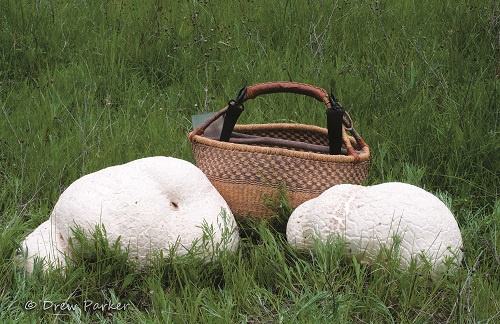 The Blackfeet said they were fallen stars. In Western ethno botanical literature, puffballs are referenced far more than other fungi. Nowadays people tend to overlook them, maybe because of the resemblance to softballs, golf balls, and volleyballs. Yet they are abundant, good to eat, high in protein, and when mature, fun to kick into explosions of spores — the only acceptable form of fungicide. A mushroom is the fruit of the “plant,” arising to disperse its spores. Most mushrooms produce spores on the underside of the cap on gills or tubes; with morels it’s along their pits and grooves. Gastromycetes, the Puffball family, produce spores on the inside, maturing into a mass of purple or brown, “puffing” out clouds of spores that are carried off by wind and water, animal and insect. Millions disseminate and in large varieties the numbers count in the trillions.

Puffballs have an affinity for disturbed and compacted environments, i.e., human habitat. You’ll find them in lawns, roads, sides of paths, and fields. They can be smaller than a pea or bigger than a soccer ball. A decade ago, I left home to run errands on a sunny spring day. Beside the walkway in the grass was a ping pong-sized puffball. When I returned several hours later, it had grown to the size of a basketball. I circled in disbelief, as normally they appear overnight in their determined size. Picking it up, the diminutive specimen was still there underneath. A friend had come by and placed the enormous puffball over the small one. Most inexplicably, it turned out he didn’t know the little guy was below when placing the venerable giant in the expanse of my yard.

All puffballs are edible if pure white inside. Once spores develop, the flesh first turns yellow and then various shades of dark, signifying they are no longer fresh. There are also two nefarious lookalikes. The poisonous (though not lethal) Scleroderma has a thick, leathery skin and dark interior. Potentially fatal Amanitas start as a little white egg before breaking free into a mushroom. This is why you cut all small puffballs in half. If your specimen is a cloaked Amanita, the embryonic appearance of a forming mushroom will be silhouetted within. I have run across these deceptively mingled together in our region.

Puffballs are the tofu of mushrooms — soft, simple, but with a bland,  appealing richness. Bread, fry, and bathe them in heavy sauces, unlike most mushrooms that are lost in traditional country recipes. The creamy texture also blends well with eggs and cheese, like feta or chevre. Larger species may be sliced and lightly fried, then frozen for future use as wraps. Dehydrated they can be powdered for an umami flavoring.

Along with being fun, yummy, and kickable, puffballs played an important role in the old west, where they were used by natives and later frontiersman as a styptic wound dressing and food. In Tibet, puffballs were traditionally made into ink after burning and preparing an emulsion. Desiccated fruiting bodies were worn by several cultures as a protective pendant. I’ll watch for your new necklace on the street.

Wine pairings: Washington Merlot, generally deeper and more powerful than from other regions, is the right contrast to the soft meat of a fallen star.