One of the pioneers of Nordic skiing on Mt. Spokane 30 years ago, Schlieder was the first recipient of the Gary Silver lifetime contribution award back in 1979 and is one of the few skiers to have a trail named after him. On any given day, you can still find him out on a far trail, solo classic skiing or lopping overhanging branches to clean up the trail.

When I first started going up to the Mt. Spokane Cross-Country Ski Park at 7 a.m. a couple of mornings a week, he, his son Drew, and a friend were some of the only people I’d share the trail with. I was filled with a mix of admiration and envy as they skated by with their hypnotic, near-silent stride. I’d think, “That’s who I want to be when I’m reaching my retirement years!”

My first interaction with Schlieder was when he volunteered to mark the course for the Spokane Nordic Challenge Loppet, a 20/30/50 kilometer Loppet (non-competitive ski marathon). Over time, I learned that not only did he love to ski for long distances, but he also had a hand in developing nearly all the trails he was skiing every day.

It started 40 years ago, back in 1977. Shortly after moving to Spokane, he teamed up with Brian Troth and local Nordic ski icon Tim Ray, who founded and still presides over the annual Langlauf 10 kilometer ski race, to create the first section of trail.

Their efforts started with a 4-mile section of trail that today includes Blue Jay, Brian’s Hill and Sam’s Swoop. “We had to cut down all the trees by hand, so it was a lot of work, and the stumps stuck up a bit,” Schlieder recalls.

Over the next 30 years, Schlieder was a constant figure in a collective of Nordic devotees. Some have long-since moved on from the Spokane ski scene, but many people have helped turn a section of woods and forestry road into what is today an almost 40-mile collection of world-class ski trails. 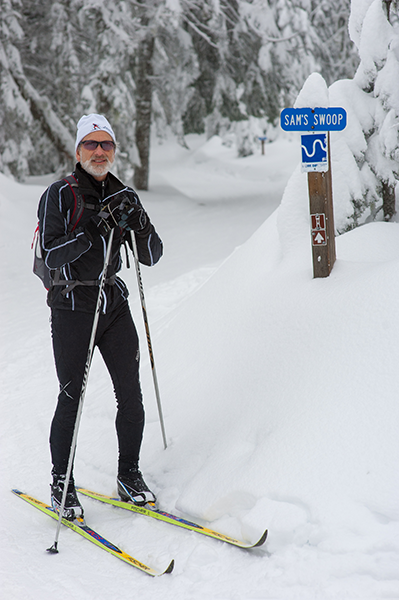 “We would go out in winter and ski undeveloped areas of [Mt. Spokane] State Park and Inland Empire Paper land and ask ‘What would be fun?’ and start flagging trees to cut in summer,” he recalls. “Then we’d have to reel ourselves in. What was fun for us wasn’t necessarily fun for beginners.”

Finally, with the addition in 2013 of the Outer Limits trail into Idaho Department of Lands real estate, Nordic ski trail development is on hold for the time being.

Schlieder says that developing trails was a huge part of what made him passionate about Nordic skiing, but it’s clear there’s more to it than that. When we meet, he brings with him a ledger that records all his ski events throughout the years, with dates, distances, and times. He tells me about the various events he has traveled to, including ski marathons in Sweden, British Columbia, and the Midwest, along with trips dreamed of but not taken to the Italian Alps and Dolomites.

This year, Schlieder and three friends will travel to the Canadian Birkebeiner ski marathon in Edmonton, Alberta. At the finish line, he will celebrate the rare completion of the International Birkebeiner trifecta: the Norwegian, Canadian and U.S. events.

I ask him what his plans are for the next week. “On Monday, I’ll head up alone for training, and hopefully be able to get a pack-ski in and let my mind go.” A “pack-ski” is an outing that’s long enough to warrant wearing a pack for supplies. He tells me that during the previous week he went on a 38-kilometer ski that took four and one-quarter hours. “I enjoy the challenge of getting a better pace and rhythm over a long distance,” he says. “It’s more relaxing than a shorter time out there.”

He tells me that it’s hard to find solitude on the trails on a weekend. He often goes out with a group of what he calls “senior guys” but, even if he goes out alone, “It’s gotten to the point [where] I know so many people; it’s hard to ski without stopping to chat.”

Perhaps at times he wishes he was the only one out there; however, considering his life was spent developing trails for the community and for new skiers, it’s clear this quiet guy with a lifetime contribution award balances this desire for solitude with a need to pay it forward. //

Originally published in the March 2017 print edition of Out There Outdoors under the title “In For the Long Ski.”

Feature photo: Few people that meet the quiet skier realize Sams Swoop carries his name, or that he helped carve it out almost 40 years ago. // Evan Sunderman

If you’re interested in cross country skiing, you can rent nordic gear at Mount Spokane.