The erratic buzz of my alarm at 5 a.m. stirred me from sleep. As I scrambled after my phone through a jumbled mess of pillows and blankets, I remembered in a jolt of excitement, “It’s a run-venture morning!”

I unlocked my phone with visions of the day ahead: running the sections of the Going to the Sun Road that were currently closed to car traffic. My head buzzed in anticipation. Opening my weather app, I pulled up Glacier National Park and read, “High of 32 degrees, low visibility, and wind gusts up to 40 mph.” Shit.

Simultaneously calling my partner in crime, Jamie Terry, and concocting a new plan, I swapped the Montana map we planned to use for the day for one of central Idaho. From Sandpoint, we determined it’d be roughly 5 hours to Hell . . . Hells Canyon, that is.

The scenery outside our car windows changed from the North Idaho sub-alpine to rolling, grassy meadows, then suddenly to vast, desert-like crags; we had little idea of how indicative those changes would be of the trail to come.

Winding through the Nez Perce National Forest down into the canyon, we were slowed by breathtaking vistas and the local pasturing cows meandering down the middle of the road.

Finally slipping through the last signs of civilization—with the small town of White Bird, Idaho over an hour behind us—we rolled into the gravel parking lot at the base of the Snake River Trail trailhead. We jumped around in a music-less dancing frenzy to shake the 5 hours of travel from our bones, and proceeded to gear up for the day ahead.

As the trail was an out-and-back in the thick of the Hells Canyon Wilderness, we were extra thoughtful in our preparation. We loaded our running packs with more water than we would possibly need, stowed away high-calorie dense food in addition to our normal nutrition, and zipped an extra layer of clothing into the bottom of our bags.

Jamie double-checked that her small, emergency first aid kit was filled with bandaids, tape, antibiotic cream, sunscreen, and a beacon, and I added bear spray and a small switchblade to the pockets on my pack straps.

Reading the signage at the base of the trail, we took note of the dangers specific to the region, including poison ivy and rattlesnakes, and discussed the appropriate strategies on the chance of any encounters.

Feeling adequately prepared, we began our run-venture with a trot deep into the canyon. As the gravel trail thinned into single track, a grand valley opened before us, and the Snake River flowed powerfully between walls of rock.

We spent the next seven miles in absolute elation on a trail we couldn’t have improved if we tried. It shifted seamlessly from purple flower-lined rollers, to jagged, technical climbs, and from grand, exposed, cliff edges to dense, enclosed canopies. It was a trail runner’s dream.

As we reached our halfway point, we checked in on our hydration and nutrition along the water’s edge, stuffing bites of nut butter covered bananas into our smiling faces and taking sips of salted coconut water between squeals of excitement.

We began our climb back up the switchbacks along the canyon wall, and felt our muscles strain against the stiffness from our break. The sun lowered, and the afternoon began its shift toward evening.

With three miles to go, I toed the edge of a particularly steep edge, letting my eyes focus on the grass lining the space between me and a swift plummet to the river. Suddenly, the green of the grass was joined by black and white slithering stripes, and I lept in fear. “SNAKE!” I warned Jamie. She hopped over the gopher snake effortlessly, and once at a safe distance doubled over in laughter at my reaction. Leaping was sort of the strategy, I guess.

We finished our run with a soak in the river, washing the salt off our faces with the crisp water. Finally, we closed our car doors, leaned out our windows, and shouted, “HELLS YEAH!” It was the perfect ending to a day of spontaneity, preparedness, grandeur and friendship. Hells yeah, indeed.

Editor’s Note: Backcountry travel in Hells Canyon in the summer can be brutally hot, waterless, and dangerous. For better, safer results, wait for cooler, more favorable fall or spring conditions (like the author did) and always check with the Forest Service on the status of trails you plan to tackle, since many trails in the canyon are rapidly deteriorating. 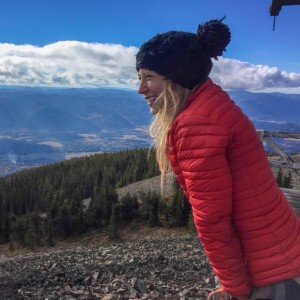