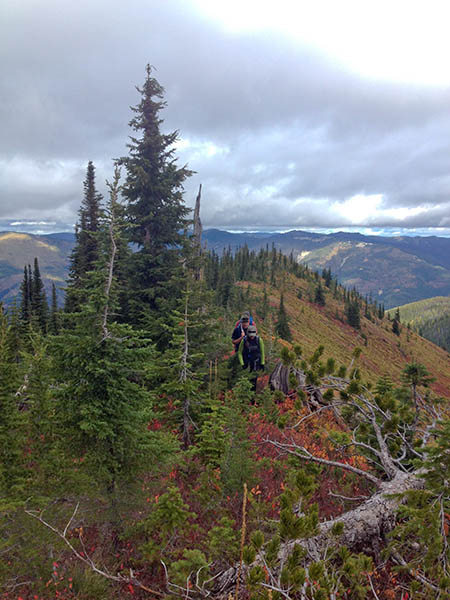 For many of us it’s impossible to see a cairn and not feel a tinge of relief. Whether impressively symmetrical or precariously balanced, these stacks of rocks comfort us into thinking that we are going the right way. They give us a feeling of balance and persistence in an otherwise off-kilter world.

This is especially true in a place like Aasgard Pass in Washington’s Alpine Lakes Wilderness, which gains roughly 2,000 feet of elevation over less than a mile. The pass is a shaky mash up of scree, boulders, and hidden streams. It is also the exact kind of place where I usually strain my eyes and hope for a cairn.

Something was wrong, though, on my first of what would be many descents off Aasgard Pass. I stumbled back and forth, trying to follow the primitive signs. They were not linear or suggestive of any particular direction. In fact, they lead nowhere and everywhere at the same time, tantalizing my tired body with a false hope of an easier way.

After half an hour of inefficiently shifting to-and-fro over the mountain pass, I did something that would normally make me feel ashamed. I paused on the steep descent, took aim, and swatted at a small tower of rocks with my hiking boot. The release was surprisingly familiar. Kicking over my first cairn felt as good as removing a splinter or yanking a weed out by its roots.

On that challenging but popular trail, cairns felt more like graffiti than a wayfinding device. They seemed like a way to replicate a Zen board on Pinterest, or a manner of incarnating a stranger’s Instagram feed. I’m sure some of those cairns were stacked with intention; however, it seemed like many more people followed suit because they wanted to look cool, because they were mimicking the crowd, or because it felt good to leave their mark on a place.

Building cairns where they don’t belong has always seemed to me an obvious violation of Leave No Trace principles. Or maybe it’s not so obvious. Maybe it shows the challenging dilemma of managing shared spaces. One person’s meaningful participation in an outdoors experience may be another’s reminder of disruptive human impact.

In this year’s backcountry issue, we invite contributors to explore the diverse ways people work and recreate in the beautiful, remote regions of the Inland Northwest. Anglers, hikers, scientists, hunters, and firefighters have unique yet similar reasons for being outdoors. Like a well-placed cairn, their perspectives highlight important considerations for playing, learning, and subsisting in harmony with the natural world. //