Right Hand Blue—Yoga for the Resisters 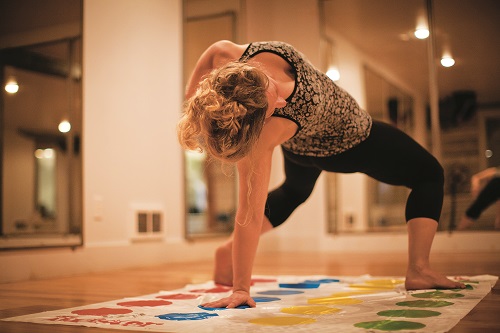 There are few things I have resisted as staunchly in my life as Zumba, eating liver, and practicing yoga. As far as I could tell, yoga was just a bunch of people doing head stands in Lycra, and other than a chance to hobnob with Michael Franti before a concert, I couldn’t see much of a benefit in it.

Like many of you, I stick to real sports. Ones that only result in a fetal position after bailing on a jump, not as some pseudo-return to the safety of the womb. And guttural breathing? It’s kinda creepy if you’re standing next to a guy in tights. Yoga, I assumed, was a sissy sport of chakra-aligning hippies in vegan shoes, no doubt.

Despite that, yoga appears to be a sexy vixen in the land of alluring activities. My friends started converting one at a time. First it was someone with a flower tattoo, so I wasn’t really surprised. Then it was my gym rat wrestling coach friend. Because I could do laundry on his stomach, I was briefly tempted to just watch. Then another biking friend came out, too. Suddenly, it was like everyone did some kind of yoga.

Still, I resisted. They’d all show up for Sunday brunch and be oohing and aahing about how sore their shoulders and hammies were from doing poses that sounded as if they’d come straight out of a Bangkok brothel. I chided them for their silly ways, then poured myself another epsom salt bath.

After some time, I started noticing a trend. As if perhaps these people were more limber, less prone to injury. In a moment of weakness one day, I tried stretching, only to discover that my version of the splits looked like a skinny slice of pie. “Yoga could help you with that,” echoed the voices in my head. 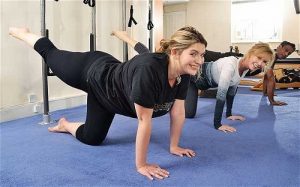 “The class was such a smorgasbord of individuals and abilities from different places and lifestyles.”

The gradual opening of my mind was excelled nearly overnight when I learned that they have something called “hot yoga” where the supple bodies of young men covered in sweat can be found in some of those aforementioned Bangkok poses. Also, the yoga studio is right next to the coffee shop.

Then one Saturday morning, I found myself showing up to a Vinyasa class at Zest Yoga. For those of you just learning, there are more types of yoga than Indian deities. Vinyasa is known as a hot “flow” yoga and is popular with the athletic masses. Bikram is a version of yoga for the flame-retardant, as the room is heated to a temperature akin to the surface of the sun. It’s designed to add a slippery challenge to people who proficiently balance on a single left toe during an earthquake.

I had lectured myself on proper yoga etiquette before I went. Don’t ogle the boys. Don’t laugh if they chant. And for the love of god, please don’t fall on your face during one of those human pretzel moves.

I threw my mat on the floor and set my water bottle down like a pro, casually observing habits of other yoga-experienced people so I could blend in. I straightened the corner on my towel. I told myself, this is just a bunch of grownups playing Twister. In really cute workout clothes.

Our instructor, Nicole, came in and performed some sort of body balance wizardry that made circus contortionists look like rookies.

I spent the next ninety minutes establishing both my ability to sweat profusely and my inability to perch like an eagle. In my defense, I’ve never once seen an eagle cross its legs. It’s biologically impossible. That pose probably is too.

I also noted that yoga could be done by anyone. The class was such a smorgasbord of individuals and abilities from different places and lifestyles. The only thing they all had in common was the skill to impersonate trees. I was pretty sure that yoga could benefit just about everyone, whether they’re looking for better balance on their bike, internal peace, or stronger knees.

The next day I hit the trails only to discover my legs were more limber. I came home without the usual stiffness of a long run. I felt some new muscle groups and deep tissues that I’d long forgotten. I began secretly attempting head stands in my living room. I started to crave those active stretches. I signed up for another class.

And just like that, I too became a convert. I’m pretty sure my body thanks me for it. //