Moms on the Rock 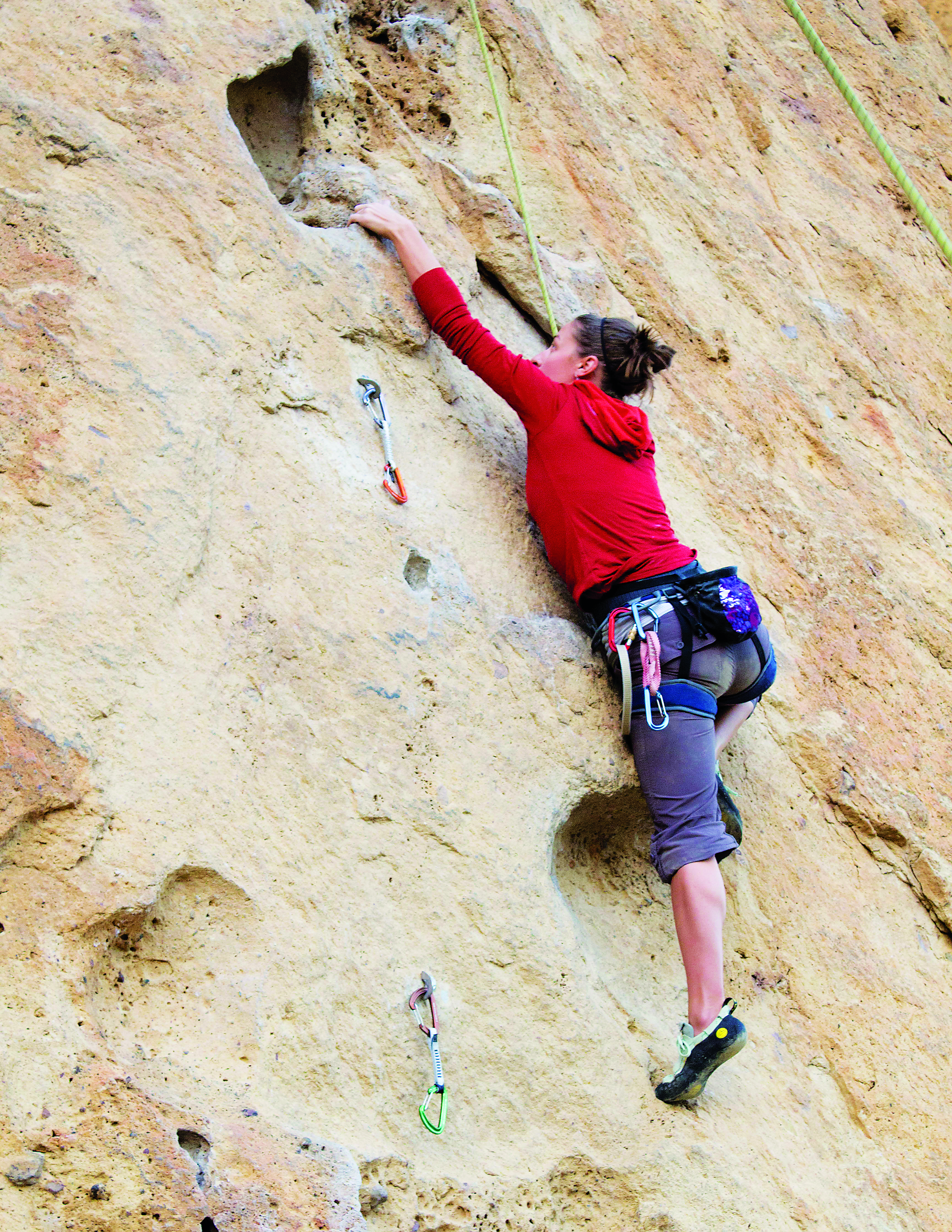 It was a glorious bluebird sky in Central Oregon when K and I pulled into Smith Rock. We’d seen the weather report, called in sick at work, loaded the car with quick draws and kale chips, and headed south for a long weekend.

K and I have the luxury of being healthy, rather extreme in our sense of adventure, and single. We’re pretty sure we’re the hottest thing to hit the market since Bruce Willis and Demi Moore broke up – K because she’s got a wicked sense of humor and chiseled figure, and me because I make delicious cupcakes and… well you’d be surprised how far a good cupcake will get you.

There is nothing like a road trip with a fellow latte addict and adrenaline junkie. Seven hours of ceaseless girl talk in a Subaru with approximately 4,201 Starbucks drive-thrus to choose from and knitting needles = chick bliss.

This was only to be improved upon by the dramatic red geographic formations of Smith Rock in the distance as we reached our destination. And the fact that we pulled into a parking lot with no less than forty beautiful climber-boys in various states of equipment removal.

We crawled out of the car with some long-drive-stiffness in yoga-pant-clad unison and, as though we’d just come from our water ballet class, did a synchronized stretch and groan. If we had not already caught the attention of said clan of men by being the only women in a four mile radius, we certainly had it now.

The silence was palpable. Sometimes I think men can smell the prospect of a home-cooked meal, even through the walls of an Igloo cooler. K and I glanced at each other and shared a telepathic thought: There are just too many to choose from!

Apparently, it is much harder to come by women who can pitch a tent as well as they crochet, mountain bike as avidly as they bake, and scramble up rocks with the dexterity of a Vegas showgirl. (This is not an accurate representation of my climbing abilities, which most often resemble the flailing, stunted arms of a desperate tyrannosaurus rex on Quaaludes trying to save itself from a tar pit.)

I headed toward the back of the car while imagining my future Bend boyfriend, sure to be found in the next 72 hours. We’re going to ride Phil’s trail, rock climb every weekend, and get married on a slackline for sure. His hobbies include building stone fireplaces and massaging feet. Probably, he’s a rep for Black Diamond.

Suddenly the rear doors of the car swung open in a simultaneous eruption of coloring books, pretzels, juice boxes, crayons, and at least one stuffed buffalo. Crumb-covered and Larabar-laden, our two spawn ejected themselves from their car seats and into the parking lot in a frenzy of kid demands and the hyperactivity of too much time in the car. Perhaps we should not buy the children road trip lattes.

Before we could shell out enough fruit leather to quiet the raucous, the thus enthralled men had parted like the Red Sea, hiding behind trees and Westfalias, preparing their chips and beer dinners. All picnic tables within food-fight distance of us were cleared. Eye contact was avoided. It was like we had the powers of Medusa or even more potent: the sweet irresistible siren call of the cupcakes, known for centuries to lure unsuspecting men into lifelong commitments.

Children might cramp our dating style, but they sure as hell don’t cramp our climbing style. Climbing, biking, skiing, and camping with my six year old have been some of the most rewarding outdoor adventure experiences of my life. Albeit questionable parenting, it has kept me current on snake-bite first-aid, bear safety protocol, and the latest Katy Perry lyrics. It is also a great opportunity to provide my daughter with tools for life: endurance, patience, strength, resilience, and better taste in music. I had to veto Ms. Perry after my ears started bleeding.

Somehow I was under the impression that being a single mother would limit my adventurous lifestyle, but this is far from the truth. It has brought a new light to all that I do – the refreshing curiosity and playfulness of a child, the one I am raising and the one in me. Plus, there are more animal crackers here.

And to all my potential Bend boyfriends: When you’re ready to sample the adventure of an awesome-mom package, chances are the camp dinner menu and post-climb stretching will be worth lugging Barbie up a 5.10. If you’re lucky, we’ll share our animal crackers too.