Confessions of a Cross-country Skier 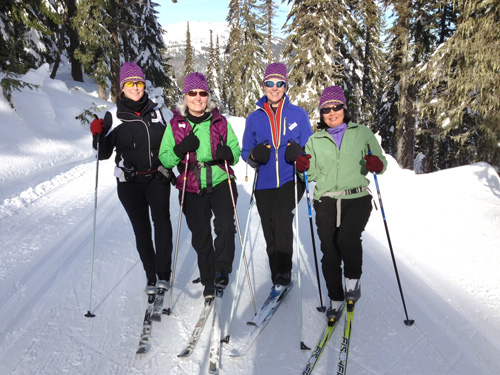 The Skinny Ski Solution for Winter Fitness and Fun

Ever since my first Spokane winter nine years ago, I craved some way to keep fit outside in the snow. I wanted to revisit a childhood spent outdoors during rural Alberta’s long winters. But unless you have a deep and abiding love affair with slush and ice patches, it’s hard to enjoy winter at ground level in Spokane. And since I hate treadmills, keeping up a solid running schedule proved almost impossible.

Two or three times a year I would be on a stepladder in the garage, sifting through the sleds and hoses and spare pieces of plywood stacked in the rafters, when I would see them: those thirty-year-old cross-country skis with the three-pin bindings my wife and I inherited from her parents and just never got rid of.

My mind would go back to my early teens, shuffling through the snow on skis a lot like the ones in those rafters. Someday, I thought, it would be fun to try cross-country skiing again. But where could I track down affordable gear to buy or rent? Waxing skis and maintaining gear sounded like a pain. And where would a person cross-country ski around here anyway? By the time I’d be down the ladder, the idea would have inevitably faded away.

Then two years ago, I was hired part-time to do some marketing and membership coordination for Spokane Nordic Ski Association, which partners with State Parks to operate the Mt. Spokane Cross-Country Ski Park. At my initial interview, they asked if I Nordic skied (which, incidentally, is the point at which I learned that “Nordic” is the same thing as “cross-country”). I said no, but that working for them would give me the perfect excuse to try.

So, I took the plunge and bought a ski package, headed up to Mt. Spokane, figured out how to get the boots to clip into the bindings, and launched onto the trail. I didn’t have a clue what I was doing and felt like a giraffe on figure skates, but it was beautiful up there. I was hooked.

Why do I ski? For one thing, it’s affordable. The only cheaper winter activity is snowshoeing. When friends come to town, we can rent skis for them at a local shop for $25 a pop. Used skis can be picked up at one of the ski swaps or on Craigslist, or starter packages can be found for around $300 at Fitness Fanatics, Mountain Gear or REI. To ski at Mt. Spokane, you need to buy a State Parks Sno-Park pass (available at those three shops), but at $84 for a year per car, that adds up to only a few bucks a day.

It’s also a great workout if you want it to be. Nordic skiing is said to be the best fitness exercise you can do on land. I can come out of the ski season in better shape than I was at the start of winter.

Then there’s the feeling of camaraderie and diversity of skiers on the trails: parents with pre-teen kids, groups of twenty-somethings, and an occasional mom or dad pulling a baby behind them in a chariot. And all of them appear to be working just hard enough to feel satisfied but not hard enough to regret being there. There will probably be a group of thirty to fifty-year-old women enjoying a laugh during a group lesson and a couple of empty-nester gliding down the trail. Chances are, I’ll be passed at some point by Lycra-clad endorphin junkies whose biggest challenge appears to be getting enough calories into their bodies. In turn, I’ll inevitably pass a few people who are content to just shuffle along while absorbing the sunshine.

On a visceral level, though, it’s about winter: the quiet stillness, the white marshmallow snow, the scent of pine, and, yes, the sick love of feeling my cheeks freeze. I actually grew my beard out this year just so frost will collect on my face.

Ultimately, I ski because I don’t want to miss out on one of the greatest aspects of life in Spokane. I can spend winter huddled on the couch cursing the ice gods, or throw on that jacket and gloves and make the most of our four-season climate.

Classic or Skate Skiing: Cross-country skiing, also known as Nordic skiing, has two forms: Classic and Skate. Classic is the traditional form where the skis face forward, parallel to each other, and the legs and arms move in a stride that produces a smooth forward motion. It is relatively easy to learn, and can be done at a relaxed pace. Most people will start out on Classic-style skis that are “no-wax,” meaning there is no need to apply temperature-specific wax to the middle of the ski to gain traction on the snow. Skate skiing involves moving the skis in an open V formation, pushing off to the side on one ski while also pushing off with both poles, then gliding on that ski while pushing off with the other. It requires athleticism regardless of how intensely it is approached.