Last Hours on Everest: The Gripping Story of Mallory and Irvine’s Fatal Ascent 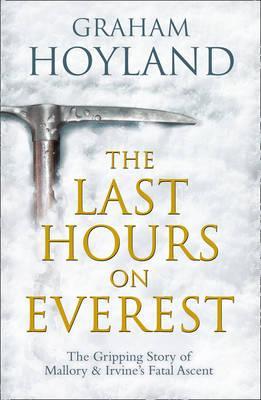 The year 2013 seems to be the year of Everest in the outdoor adventure publishing world. Being the 60th anniversary of the first ascent, the 50th anniversary of the first ascent of the west ridge and the first traverse (the 1963 American expedition), there are no less than a dozen books on climbing the mountain that were written, rewritten or re-released this year. This is one of the best. Many books written by the adventurer attain readability by the use of a ghost-writer to improve the literary quality. For a book primarily written by the adventurer, “Last Hours on Everest” is very well done.

“Last Hours on Everest” digs deeply into the history of climbing Mt. Everest and the Mallory-Irvine mystery. While acknowledging the family connection to and his bias in the Mallory story (Howard Somervell, a 1924 expedition member was a cousin), Hoyland does an excellent job of presenting an unbiased assemblage of information on the possibility of a 1924 first ascent. In this work he refers to and cites essentially every person and source dedicated to solving the mystery over the last several decades.

Hoyland notes in his preface: “This is going to be a personal story, a detective thriller, a biography, and a history book.” In its pages, “Last Hours on Everest” accomplishes all this. Well, maybe it isn’t a thrilling detective story. The story of Mallory and Irving has been told so many times, by so many writers, only the book about finding Irvine’s body would include a newness that might make the story “thrilling.” That is not to say that his conclusion as to Mallory and Irvine’s success comes about without some suspense. Hoyland links a great deal of evidence from multiple sources, including several of his own expeditions, to reach a personally definitive answer to the question. I’ll let you read the book to discover his conclusion for yourself.

“Reading Last Hours on Everest” would be an excellent starting place for an Everest history novice. Even those who have read many or most of the spate of books published after the discovery of Mallory’s body in 1999 will enjoy rereading the story with Hoyland’s commentary interspersed.