Friendship Connections In the Great Outdoors

Just as the pandemic lockdown started, my friend Carol suggested we go for a camping trip. Being that it was her birthday, and the thought of our kids entertaining each other outside after a few months of extreme indoor togetherness, it was a quick, affirmative yes. My husband, Derrick, as usual, did most of the packing, and off we went to a primitive eastern Washington campsite.

Derrick was setting up camp when I noticed the pile of wood he had just chucked out of the back of the truck. I asked where the hatchet was and if everyone was ready for a fire, since I was cold. Unbeknownst to me, Derrick had just realized he’d forgotten the tent poles, pointed in the direction of the axe and suggested in an agitated tone that Carol could help me chop the wood and start the fire.

I shot him an expletive-laced look that meant I’d rather chop him. At the same time, Carol announced that she had never split firewood before, and while I got the fire going, Derrick sheepishly set about hunting for sticks to prop up the tent.

This exchange has become a constant joke in our lives now, where Derrick will suggest I ask Carol for help if I’m doing anything remotely “outdoorsy,” even if Carol is in another state on a different trip. It’s his way of saying he’s sorry for underestimating me. (He seems to have forgotten that I kept a fire going in our woodstove for over a week one winter while he was off backcountry skiing.)

I often wonder how frequently things like this happen—where we decide what a person is or isn’t capable of based on the limited understanding we have of them. We often make up ideas about what our friends can or cannot do based on what we see on social media. More importantly, how often do we decide if we will join an invite, or include friends or a new acquaintances, based on the limited view we see online?

A few weeks ago, Carol invited me on a bike ride. My first thought was that I couldn’t keep up with her, and she would be disappointed with the ride. This probably comes from hearing Derrick talk about not getting enough exercise on mellow rides or hikes for so many years. Yet Carol’s response was golden: “It’s about the friendship, not the miles.”

As an extrovert, often looking for connection in social media, playing in the outdoors for me is not primarily about fitness or other adventure objectives; it’s about connection. For my husband, an introvert who doesn’t frequent social channels and feels like there is limited time for exercise and connection with nature, his outings are about something very different.

Both are okay. Both kinds of outdoor time are important. The point of all this is to remind ourselves not to amplify inaccurate perceptions about others that might create further barriers to potential connection and quality time spent outside.

The key to making connecting outdoor adventures work, it seems, is self-awareness of our motivations and fitness levels, expectations of ourselves and others, and making sure we’re all communicating about these things.

That day at the campsite, after our chuckle about my fire-building skills, I hacked up some kindling, balled up some paper, and made a nice hot fire while Derrick made a make-shift, pole-free tent in the back of the truck where we slept comfortably. In the morning, he brought me coffee and breakfast while I was curled up in my sleeping bag.

We all do what we can and what we’re good at out camping as in life, but, as we now like to say, if you need some serious help out in the backcountry, you’d better ask Carol.

Shallan Knowles is co-publishes Out There Outdoors with her husband, Derrick, and is also visual editor. She grew up in Coeur d’Alene, Idaho, is an alumni of University of Idaho, and previously worked for Mountain Gear and taught yoga classes. She enjoys alpine skiing, paddling, biking, and camping with her husband and their young son and dog, Fernie (named after their long-time favorite ski town, Fernie, B.C.).

women in the outdoors 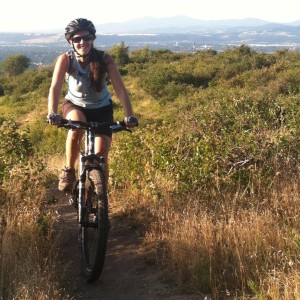