Some months ago, my friend Scott was diagnosed with terminal cancer. It’s the kind of news that would have me buried in pints of ice cream and trying to get a head start on morphine pills. But not Scott. Scott said he had one thing on his bucket list: Climb Kilimanjaro.

We gathered a small group of naive and inexperienced people with, apparently, lots of money and time on their hands, and headed to Tanzania with our North Face duffels—so that we at least looked legit—and sunblock. There are a lot of different ways to climb a mountain, but Kilimanjaro almost forces a kind of mountaineering luxury. Guides and porters are mandatory.

“This isn’t our usual kind of trip,” my friend Christi says. I’m hoping that by this she merely means we won’t get lost this time, but she is referring to the extensive staff that is going to facilitate our climb. If I’m ever diagnosed with cancer, please remind me how nice it is to have someone else pack my tent while I start my ascent each morning.

Regardless of the village of locals helping our crew up the mountain, we had to at least dress ourselves and schlepp one slow foot in front of the other as we trekked first through the jungle, then the high heather, and then into the moonscape slopes above 16,000 feet. 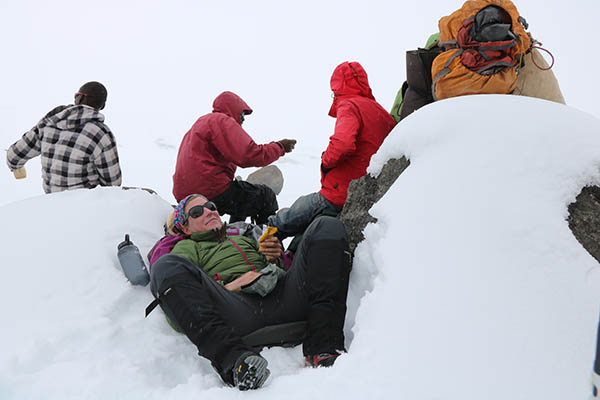 Mother Nature must have heard our elitist, self-reliant complaints and decided to complicate our hike up route with a few feet of uncommon snow. Most of the porters had never seen snow. My guide, making his 203rd summit, told me that it has been more than 15 years since they had snowfall like this. We did not tell the rest of our party, but instead acted like this was all standard trekking experience.

“Shouldn’t we have crampons and ice axes for these steep, snow covered slopes?”

As we grind our way upward on our summit attempt, the weather changes by the minute and the conversation dwindles to occasional health checks. I look down the white expanse, blotched with exposed volcanic rock, and watch this unlikely crew of climbers pick their way up one of the Seven Summits. They don’t even know how awesome they are. Or how sunburned.

It is a reminder to me: Anyone can do any damn thing they want. You don’t have to be some experienced mountaineer to give climbing a mountain a try. You don’t have to have the fancy gear, the record, the ripped abs, or the right genes. You just need a bunch of crazy friends who are willing to support your ideas, share their energy bars, and not judge you when you start vomiting at 18,200 feet. They are allowed to make fun of you later at camp, though. 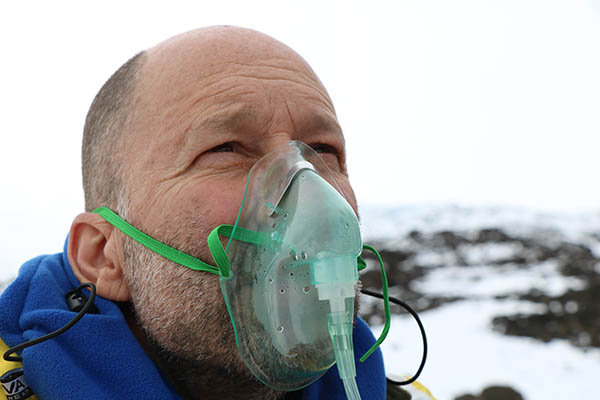 I’ve climbed a lot of mountains in my day, and I’m pretty sure I will climb more, but none will move me as this one has. Don’t let anyone tell you it’s an easy hike up either, since no one hikes easily at 19,341 feet. Cresting that final ridge after making the Western Breach, seeing the summit sign in the snowy distance, the choked back tears came in full force.

There is something about a summit that fills the soul with profound gratitude. I don’t know if this was Scott’s intention for reaching the Roof of Africa, but as we stood there on the top of Uhuru Peak, each of us expressed the same message of thankfulness.

We can overcome mountains, even while cancer is overcoming us. Sometimes that mountain is just getting out of bed in the morning. Sometimes it’s Kilimanjaro. And every day of our blessed lives, we can share in the experiences and friendships that make those mountains a little less intimidating and life a little more meaningful. Climb on, my friends, whatever your mountain is.

A special thanks to the crew at Mountain Gear for their support and encouragement, and to African Outdoor Expeditions for keeping the gluten off my plate. //

When Ammi Midstokke is not chasing her first love (trails), she is preaching her second (food) as a Nutritional Therapist. She wrote about carbo-loading in April.

Originally published in the May 2018 print edition of Out There Outdoors under the title “Kilimanjaro: The One-item Bucket List.”

Who Pays (and Doesn’t) for Public Lands?