Women on Wheels: Closing the Local Cycling Gender Gap One Bike Shop at a Time 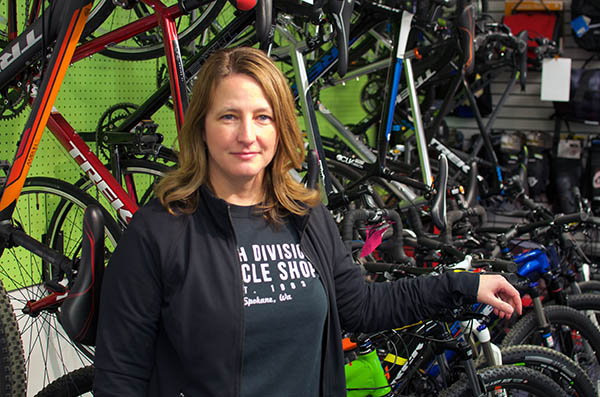 Whether competing in races, riding for exercise and recreation, or using a bike for transportation, women have consistently been outnumbered by men. That has been gradually changing for the better. These days, I see a greater number of women at cycling events. And the women-only bike events are successfully getting more ladies involved.

But there’s one area where participation by women is still pretty minimal. The local bike shops. It’s not that they don’t or won’t hire women. Rather than try to answer why, I thought it would be more useful to find women in our area with bike shop experiences to share.

In 2003, Stine Hansen was hired on as a sales person/helper at Freerange Cycles in Seattle. She was offered a job by the owner after she saw the work Hansen had done on her own bike. Hansen’s cycling background goes back to her childhood. In her teen years, she often hung out at a bike shop where she realized the possibilities in modified and custom-built bikes. In the 80s, she converted her cruiser to a mountain bike. She loved the creativity of modifying a bike to suit your own style, needs and purpose. Just before moving to Seattle, she built her first single-speed from the frame up. Stine considers herself fortunate to have worked at a small, woman-owned shop, where mechanics were expected to serve customers and women didn’t feel excluded.

Liza Mattana went to United Bicycle Institute in Ashland, Oregon, in 2005 and received her Certified Bike Mechanic certificate. At the time she and her husband were excited about biking and the biking culture in Spokane. Attending the course was actually her husband’s idea. Mattana said it was one of those marital things where your spouse says, “This sounds so cool. I wish I could do it. You should do it!” The timing in their lives was right so she did. Mattana learned some basic bike mechanic skills and general tool know-how, which were all completely new to her. She worked as a mechanic at Two Wheel Transit for a few months before hiring on at REI where she stayed for about three years. Mattana said both shops were wonderful. She always felt welcome and never felt judged. On her first day at REI, another mechanic saw her struggling to put a bike on the top-level of a double-decker bike rack, something she had never dealt with before. He gave her a tip on how to do it, didn’t offer to do it for her and said she’d get the hang of it. She had lots of similar experiences at both shops.

After Brenda Mangine got out of college in 1992 she met Scott Willegalle who worked at a bike shop in Eagan, Minnesota. He got her interested in mountain biking, and she discovered the fun of rolling through the woods. She needed a part time job while getting her flight instructor certificate, so she applied for a sales position at another shop where she became one of their first female employees. Although it was and still is a male-dominated field, she was used to it. She went to college to become a pilot where it was the same situation. But the bike shop environment was more relaxed. Mangine says the men were receptive to having a woman’s perspective in the store. The manager made it easy to fit in and taught her all aspects of the bicycling industry. She did sales, merchandising and inventory. She and Willegalle moved to Spokane in 1995 and a friend told them the best place to get a bike shop job was North Division Bicycle Shop.

Michael Conley hired her as a salesperson, where she had some challenging encounters with male customers. No matter how well she would answer their questions, some men weren’t comfortable with her being the expert. Mangine didn’t let that attitude bother her and deftly steered them to someone else. But she had the opposite reaction with female customers. They loved seeing a woman in the shop. It put them more at ease, especially if they were new to cycling and they were unsure of what questions to ask. Mangine was promoted to store manager six years ago. I think she’ll be sticking with the shop because just last month she became the new owner.

Robin DeRuwe, president of Fitness Fanatics, got serious about bikes in 2000. Back then there were very few women-owned bike shops, but she sees more of them at the bike shows now. She learned basic maintenance and bike building but relies primarily on her smart and experienced staff. Based on her customer interactions, she thinks it’s easier for them to ask her questions because she doesn’t treat them like they should already know everything. DeRuwe still gets a kick out of it when a sales rep enters the shop, walks right past her and asks the first guy they see if they are the owner, only to be directed right back to her.