If wisdom is earned from elevation gained, miles walked, or risks taken, Chris Kopczynski is the new 21st century Aristotle. As an athlete, adventurer and explorer, Chris has few equals. He wrestled varsity for four years at WSU; completed early first ascents of peaks and routes on mountains throughout the world; rode his ten speed from Berkeley, California to George, Washington packing 70 lbs of climbing gear; caught and released hundreds of salmon and halibut along the Alaskan and British Columbia coasts; was the 9th American to summit Mt. Everest; and the 11th person in the world to climb the highest peak on each of the seven continents. He did most of this while raising a family and managing a successful construction company. 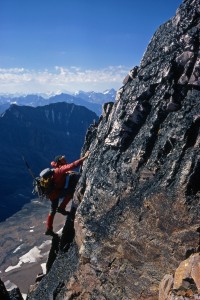 Most people would find these accomplishments reason to kick back and relax, but not Kopczynski. There was more to do. This time for the wilderness he loves and the salmon that are so important to his life. “There was an article in the paper about a consortium of mining firms applying for a permit to open the Pebble Mine, a proposed open pit copper mine at the headwaters of the Nusagak and Kivichak Rivers, both of which flow into Bristol Bay,” Kopczynski says. “Any disaster at this mine has the potential to wipe out the largest sockeye and king salmon runs on Earth.”

Rather than stand by and wait for the political process to unfold, Kopczynski decided to make a documentary film that touches on his life in the mountains, the importance of salmon to our lives, and why all of us need to be good stewards of the environment. And maybe, just maybe, his efforts would help stop the permitting of the Pebble Mine. “I knew I couldn’t do it alone, so I enlisted Lon Gibby as co-producer,” he says. “Collecting the material we needed to tie it all together took years, but I think what we have accomplished is remarkable.” 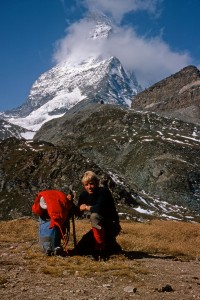 Central to the film is Kopczynski’s climb of Mt. Fairweather to honor his late father, Bernard Kopczynski. “My dad took our family salmon fishing every year. It was the highlight of our summer,” he says. “I had decided to put his favorite Lucky Louie fishing lure on the summit, and I finally did so. It was the most poignant moment I’ve ever experienced in the mountains.”

Like a sockeye trying to reach Red Fish Lake in the Sawtooths of Idaho, climbing Mt. Fairweather, the highest mountain in the world from tidewater to summit in the shortest distance, is no easy task. Kopczynski and an assortment of fellow climbers tried several times, but came up short. On his third attempt, the weather and snow conditions cooperated and he and his partner, Gerry Roach, reached the top of the 15,300-foot peak. “It was magic,” says Kopczynski. “The weather; the ridge; the effort it took to stand there. I buried my dad’s Lucky Louie in the snow and it brought back so many good memories from the past.”

The documentary may lean toward a man and his mountains, but salmon play a significant part in the production. “Lon [Gibby] provided the only color footage of the Columbia River flowing over Kettle Falls,” says Kopczynski. “To think that less than 75 years ago, millions of 60 to 100 pound salmon returned each year to their spawning grounds hundreds of miles north of the border. No matter what it takes, we need to bring salmon back to the Columbia above Grand Coulee Dam and get it done in our lifetime.”

Wisdom Earned took years of effort to produce, a mountain of personal funds, and a whole lot of heart to make. The movie is another notch on the wood shaft of Kopczynski’s ice axe that looks like it has been chewed up by a hungry beaver. Knowing Kopczynski for the past 50 years, I know this project won’t be his last.

Meet Kopczynski and see the film “Wisdom Earned: A Mountain Climber’s Perspective,” on Wednesday, October 8 at 7:30 p.m. at the Bing Crosby Theater in Spokane. All proceeds benefit the Dishman Hills Conservancy (www.dismanhills.org). Tickets are $17 and are available at Tickets West Outlets. // (John Roskelley)