Why do you run? You could ask a hundred runners that question and get a hundred different answers: to get stronger, for mental clarity, to get the dog out of the house, for the endorphins—the list stretches on and on. A few local runners shared how running has been a part of their own stories: a longtime competitor and coach, a beginner who runs with her dog, a cancer survivor-turned-Ironman, and a young person finding her groove. Their lives are as unique as they are, but they agree on one thing: running has left them better off than they were before.

When Jackie Kaps started running in 2011, she was fulfilling a promise she’d made to her dying mother. She’d spent six years providing care for her parents, and before her mother passed away, she asked Jackie what was going to happen to her.

“I said, I’m gonna get off of the couch, start running, stop smoking, get healthy,” Kaps says. She did exactly that, breaking her smoking habit—a pack and a half a day for 35 years—and registering for races, first Bloomsday and then the Windermere half marathon.

Running didn’t come easily. “I didn’t know you needed to learn to run,” Kaps says. Wanting to train better, she joined No Boundaries, a beginning training program offered by running store Fleet Feet Spokane. “You’d run for a minute and walk two for an interval of four,” she says. It was difficult, but she completed the program just before receiving a life-changing call from her doctor: she had stage two breast cancer.

For some, that would have been an excuse to slow down, but Jackie kept training. In 2013, she ran the Jingle Bell Run after two rounds of chemo. “I was bald as a cue ball,” she says. “My hemoglobin was so low it’s amazing I was walking, let alone running.”

“When you’re diagnosed with cancer, your world revolves around treatment and the disease process,” she says. “Running gives you a different focus. It makes me feel whole and healthy. Cancer takes a lot away from you. Running gives it back. Whether it’s a quiet, early morning run or a group event like Bloomsday, it adds beauty back into my world.”

After chemo, a double mastectomy, and reconstructive surgery, Kaps set her sights on the triathlon. Her first was Wonder Woman, in 2015. “It was the very first time I had tried to bike, swim and run all at the same time,” she says. “I fell twice. I wrecked my bike.”

Undaunted, she pursued even bigger challenges. In 2017, she finished the Portland marathon and Ironman Arizona. Her current goal is completing the Coeur d’Alene Ironman, a feat she’s attempted twice but hasn’t accomplished, getting cut off on the course the last two years.

Some might find that discouraging, but Kaps knows better. As she told her running coach after her last attempt in Coeur d’Alene, she may not have finished, “but I’ve come farther than I’ve ever come before in my life.” 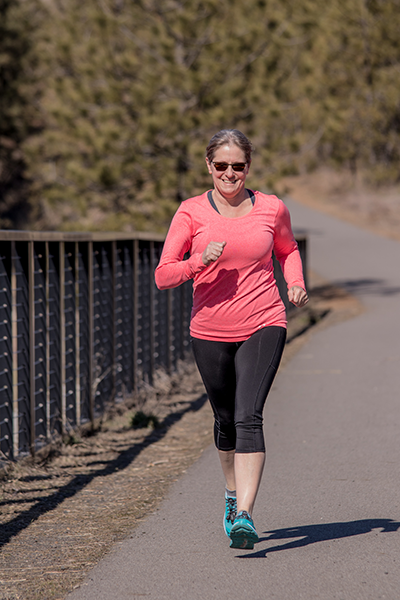 For Ken Bell, one race changed everything. He was a 14-year-old in the 1960s, growing up in the tiny community of Tonasket, Washington, when the track coach needed someone to race the mile. Bell had never run farther than 400 meters but said he’d try. He remembers going into “that one race, not knowing what I was doing. I got done and everybody was like, ‘Oh my gosh.’” His time was 4:43. Ken’s now 67, and he’s been running, and coaching running, ever since.

After high school, where he was the state’s Class A 2-mile champion in 1969 and 1970, Kansas State offered him an athletic scholarship for running. Later, after teaching for a couple of years, running friends including Don Kardong encouraged him to race in Europe. What was meant to be a short stint abroad turned into a successful running career and three decades of teaching and coaching running on military bases in England. He raced all over Europe between 1977 and 2007, in “everything from the marathon on down.”

Bell retired to Spokane and began volunteering with the Ferris cross-country team alongside coach Mike Hadway. In 2013 he applied to coach cross-country at Rogers. As a youth, he trained there with famed coach Tracy Walters, one of the people who had been “such a big influence on my running life,” he says. He’s been at Rogers ever since.

Bell’s had many notable achievements—if asked, he’ll talk about his 4:05 record for the mile, his 8:43 for the 2-mile—but that’s not what makes him proudest. “My biggest accomplishments are the athletes I’ve coached,” he says. “All of those guys are my kids.” At Rogers, he celebrates the diversity of the student body. In the warm-up, students will count in their native languages, one in Russian, another in Swahili, one in Erdu. “I’m always teasing, ‘We’re the United Nations,’” he says.

Bell talks about the incredible work ethic he’s seen among students, some of whom are taking AP classes and holding down jobs in addition to competing in team sports. Bell helps them meet goals and shave off time, knowing that with a little success on the track or the cross-country course, new opportunities might follow. Running could be the ticket to college, just like it was for him. One race can mean a lot. “I mean, that just opened up everything,” he says. 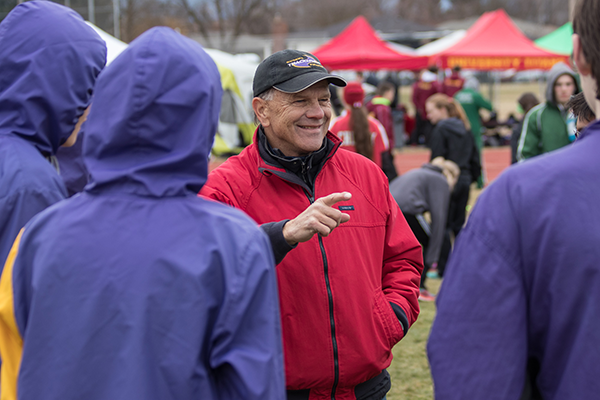 “I lost that ‘being active’ part of my life for a while,” says Kate Hellenthal, 27. A native Spokanite who was active in sports growing up—skiing, volleyball, basketball—she quit after a series of injuries. Running has changed all that.

Last year, while she was living in Brooklyn, Hellenthal was impressed when a friend signed up for a half marathon. “Watching the work she put into it was inspiring and motivating,” Hellenthal says. So she started running, often with her dog, Alfie. When Hellenthal moved back to Spokane this past year, she started signing up for races—the Sunday Sundae, the Spokane Half Marathon, and the Jingle Bell Run. She’s got plans for a spring half marathon and a 10k. Racing, she says, helps her stay motivated as she builds toward her goal of completing a marathon in 2019.

Running gives Hellenthal something other sports didn’t. “It clears out the clutter that lives in your brain all day long,” she says. “There is something about the solitude combined with physical activity that has really affected me.”

Having lived away for 10 years, running is reacquainting her with her hometown. “Running has definitely helped me see more of it and explore more of it,” she says. The challenge is fitting it into her schedule. As a kindergarten teacher with Spokane Schools’ new Spanish immersion program, Hellenthal is on her feet all day and already up plenty early. Sometimes after-school runs are about all she has time for. Luckily, Alfie—an “extremely active dog”—is always ready to go. “Running has strengthened our bond,” she says. “We have to read each other and respond to each other, especially on our long runs.”

Hellenthal loves the transformation she’s felt this year. “I feel incredible,” she says. “My legs and lungs feel so strong—a relatively new feeling for me, considering I have exercise-induced asthma and have had pneumonia seven or eight times. I’ve lost weight, and I look and feel healthier than I have in a long time. It’s been a really nice feeling, to combine physical and mental/emotional strength.” 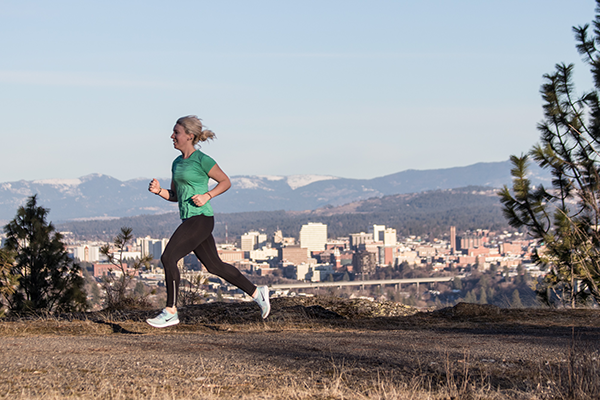 Lauren West has many talents. She’s a bass guitarist. She plays soccer and basketball and climbs at Bloc Yard Bouldering Gym with her younger sister. She likes painting, and mountain bike racing, and backpacking, and cross-country skiing. But when she gets home and wants to shake off the stress of the day, running is this 12-year-old’s go-to activity.

“If I get back from school and I’m like, I’ve got to get my head out of this, I’ll go. I’ll just leave,” West says. She’ll either head out with a parent or her dogs, Hank and George. When she’s running, “I don’t think about school,” she says. “I just focus on right, left, right, left.”

Running has always been part of West’s life. As a toddler she was pushed along by her mom in a jogging stroller. Lauren did her first race in Leavenworth when she was about 5.

As time has passed, she’s gotten stronger. She’s faster than her family members now. Her endurance has increased, and so have her running accomplishments. On her first Bloomsday, in first grade, she ran 2 of the 7.5 miles. The next year she ran half the course. In 2017 she ran the whole thing. She runs cross-country, and qualified for All-City this fall. “I was really proud of that one,” she says.

West has plans this spring to run Rapid Rabbit and Bloomsday (she hopes to finish in under an hour), and a trail half marathon this summer. She wants to run a 6:30 mile. She also has a personal goal: “I’d like to beat my friend Darius,” she says. “He’s always ahead of me.”

Long-term ambition? Running in the Olympics. At 12, it’s impossible to know exactly what the future holds, but running has already shown West that it’s worth it.

“It makes me happy once I’m done,” she says. “I feel completed.” 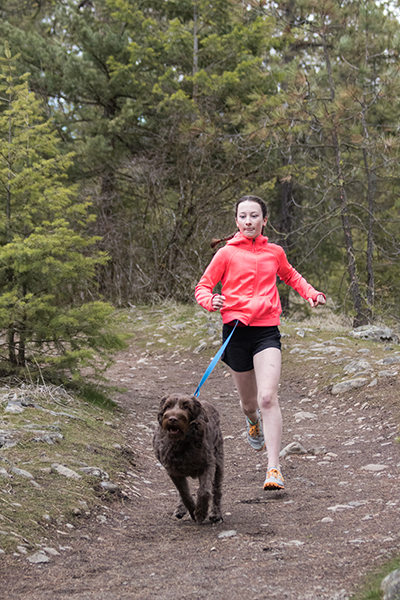 Sarah Hauge will be running Bloomsday this May and hopes to try a new-to-her half marathon this summer. She wrote the Run Wild column in the March issue.