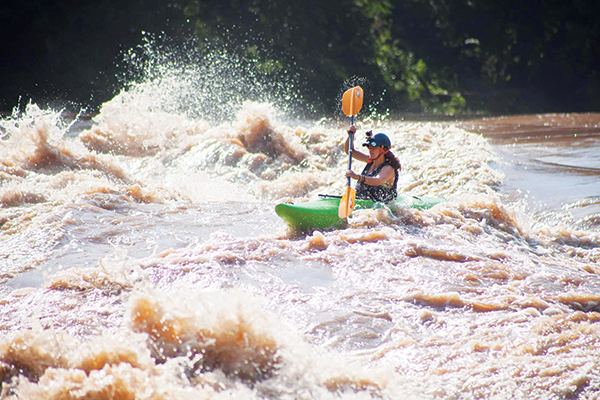 Leah Hillbrand and Sierra Jo Sans charge whitewater in very different ways that both leave me clutching the arms of my chair. Both also hail from Eastern Washington University, where Hillbrand is a whitewater instructor and Sans is a student in the outdoor recreation program. But those aren’t the only things they have in common.

“You’re hard to keep up with, but in a good way,” I found myself saying to Sans while trying to sketch a snapshot of her life. She takes classes on a part-time basis from Eastern Washington University’s outdoor program so that she can spend her spring and summers as a climbing guide and video boater on the other side of the country. I caught up with her in Washington between visiting with family in California and gearing up for another season on the Upper Gauley River in West Virginia. My first thought was, Why West Virginia? Sans quickly corrected my ignorance. “There are hidden outdoor gems that people who have never been don’t even know are there.” The Upper Gauley is a world-renowned class 5 river. Rafting companies describe it as gut-wrenching, heavy, intimidating, high adventure, and world class in their promotional materials.

San’s work on the river is not restricted to trip preparation and the expected guide/client interactions. She offers video boating services, which is a sport unto itself. Here’s how it works: She paddles ahead of commercial rafting groups in a kayak, eddies out in class 5 rapids, and films clients on the most exciting sections of the river. Then she charges ahead to edit footage, put the content to music, and render the video. Clients have the chance to purchase the video if they wish.

When I talked to Hillbrand, Sierra San’s whitewater instructor, she emphasized how impressive San’s video boating work is. The Upper Gauley is “second in the country and seventh in world in commercial kayaking,” Hillbrand explains. She knows because she guided that river for nearly a decade before moving to Spokane for a program manager position at EPIC Adventures. 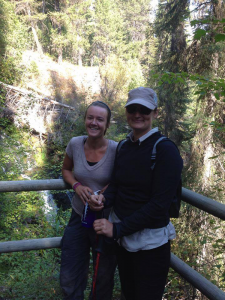 The interesting thing about Sans following in Hillbrand’s footsteps is that she didn’t, really. Sans knew about the Upper Gauley scene because of Hillbrand, but did not tell her when she applied to the same company. Sans wanted to get the gig on her own merits without a contact pulling strings. Plus, Hillbrand intimidated her at first. “She was a woman I would like to become one day. I was almost afraid to open up and try to get to know her. But through a couple of trainings, the walls got broken down, and I found her to be an awesome mentor.”

I know the feeling. I also used to work at EPIC Adventures, which is what EWU calls its outdoor recreation program, and Hillbrand’s reputation preceded her. I still remember how the former director described her river boarding. She sounded as proficient in the water as an eel, finding her lines with only a small paddle in her hand and a wetsuit against her skin. It’s the kind of thing that makes most land-dwelling mammals want to pluck her out of the water. The athletes look so vulnerable as they navigate rapids without boats and oars. But then I learned about the decades she’s spent guiding and instructing whitewater, mountain biking, and caving, and I realized that’s how Hillbrand rolls.

“In my mind river boarding is a lot safer than kayaking because you’re not trapped if you go upside down. Plus swimming comes natural to me…I enjoy the full immersion piece,” she explains. I still think she’s gutsy and just a tiny bit crazy.

Another thing Hillbrand and Sans have in common is being a minority in their sport. “My first raft guide training was me and nine guys who all thought they knew what they were doing, and I was a small female. I had to prove myself,” admits Sans. Now, she is the only member of that cohort guiding on a world-class river.

The relationship between this veteran and emerging whitewater athlete calls to mind one of the best parts of learning a new sport—finding our mentors who give us a reference point for what’s possible. Like Sans, we all draw inspiration from those who have gone before us, even as we choose and run our own lines. //