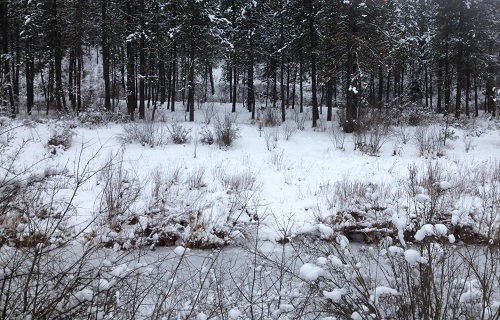 Being readers more than TV watchers, after the tragic terrorist attacks in Paris and Beirut this past month, we read the sickening details on our phones and shuddered and boiled with anger like many others all across the world. It’s difficult to comprehend how some human beings can be so filled with hate, so blinded by their own warped realities, and/or tortured by mental illness that mass murder of innocent people becomes not only possible but a pre-meditated compulsion. Since 9/11, my instinctive reaction to national and global tragedies of this scale has been to escape outside, as soon and as often as possible. I sometimes wonder if it’s an automatic attempt to process it all in a place that makes a hell of a lot more sense. Or maybe just self-centered circumvention.

The night after the 9/11 attacks that killed nearly 3,000 people, I instinctively retreated to the woods near my home in Cheney to walk, breathe, listen, and feel my way through that channeled scablands forest, hoping for some bit of peace and a path to re-orient shell-shocked emotions to a world that had seemingly gone mad. I don’t remember many details from the walk that night, but I will never forget the dark, star-filled skies that were creepily devoid of airplane traffic. Normally a reliable reminder of our civilization even in the most remote places, that night the absence of crisscrossing lights and distant rumbling in the sky became a strange and grievous reminder of the day’s events. Yet the farther I walked into those dark, tranquil woods – a place that seemed magically immune to the violent chaos a few twisted humans had just unleashed upon our world – the better I felt.

After the latest terrorist attacks, without ever consciously thinking about it, I found myself making more time to bail from the office and disappear alone for an hour or two down by the river, deep in the pines. Like a natural reflex when unthinkable things go down, a primordial craving for the order and purpose in nature seems to rise up. How much time spent absorbing the word’s endless string of tragedies is enough to continue to be an informed, responsible citizen? How much is too much?

When I feel a lump building in my throat and tension creeping across my chest and shoulders, then up my neck and face whether it’s from work stress or world distress, I know it’s time to step outside. To breathe fresh air, ponder moving water and wind-sculpted clouds to a backdrop of birdsong and the steady beat of my own plodding, rhythmic foot-falls on soft forest trail. //