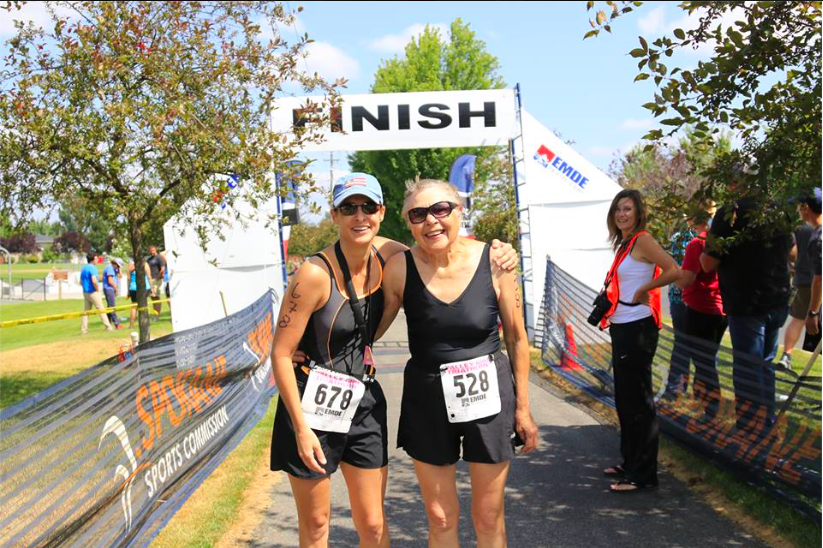 Newbie female triathletes are in good hands at an event organized by Emde Sports. Every summer, Co-founder Marla Emde directs two women-only sprint-distance triathlons: Valley Girl Triathlon at Liberty Lake in July, and WunderWoman Triathlon at Medical Lake in August. “The Valley Girl was the first women’s triathlon in our area, and it holds a special place in many hearts,” says Emde. After racing Valley Girl twice, I understand why.

The Valley Girl transition area and swim course are located at the northwest corner of Liberty Lake, which is reliably clean, clear, and warm, often making wetsuits optional. Instead of an intimidating mass swim start, participants start in age-group waves spaced five minutes apart. After a quarter-mile swim, athletes jog a short distance to the transition area, where they experience the frenetic atmosphere that results when several hundred athletes buzz in and out of a bike corral, stripping their wetsuits, regaining their bearings, and trying to remember to remove their swim caps before putting on their bike helmets — all with hundreds of cheering family members and helpful volunteers shouting encouragement and directions. Once out of transition, athletes have only a few yards to enjoy their two-wheeled speed before they encounter their first climb. The rest of the 12-mile course is mostly flat, but several 90-degree turns keep everyone alert. Athletes return back to the transition area amidst volunteers who insist on slow speeds — a necessary direction due to the congestion. The two square feet beneath each athlete’s bike that was so orderly before the race is now a jumble of goggles, swim caps, shoes, bottles, and gel packets. The three-mile run takes athletes up and around Trailhead Golf Course on a paved pedestrian path, then along a residential sidewalk, ending at Pavilion Park where David’s Pizza provides post-race calorie replacement.

Valley Girl averages about 500 finishers, but this popular race started out as a passing remark. “Ironman Coeur d’Alene had just had its inaugural year, so the triathlon bug was hitting our area,” explains Emde. “I was chatting with some friends about the need for a women’s tri in our area. Most women weren’t going to travel 300 miles to do a sprint-distance triathlon, so something in their own back yard was perfect!” For more information, visit www.valleygirltri.com. See our August issue for a WunderWoman Triathlon race report. //