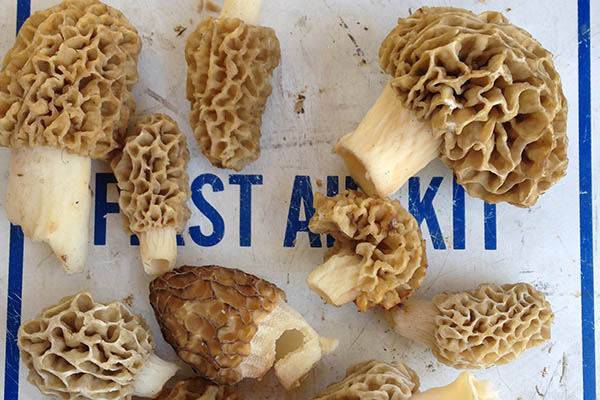 Liza Mattana and her family brought home an impressive haul of morels in early May. “We went up into the Colville National Forest and they were just everywhere,” she says. It’s a bumper year for morels, the silver lining to last summer’s devastating forest fires. The mushrooms thrive on ground disturbances like logging and big burns. Mattana loves mushrooms, but most of all, she loves the hunt. “They are so rare and hard to find that you become kind-of hooked and obsessed with finding more,” she says. “It’s like you’re on this crazy Easter egg hunt and you just want to find all the eggs.”

Foraging is in Mattana’s DNA. She remembers tagging along when her mother harvested wild mustard greens from an abandoned plot of land in San Jose as a kid, and scouting around for tangy, heart-shaped wood sorrel leaves with her friends. She, her husband John Speare (a long-time OTM contributor), and daughter Maddie joined the Spokane Mushroom Club to learn how to forage fungi. After a few forays with the group, they can confidently mushroom hunt on their own. Still, she takes great care to ensure the mushrooms she finds are safe to eat. 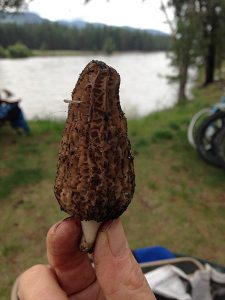 As strange as it may feel to bring home food from the forest or the roadside, it’s perfectly legal to harvest wild food from public lands. Wild ginger, balsamroot, yarrow, huckleberries, cattails, and a variety of mushrooms grow on park land in and around Spokane. Plus, some of the weeds that grow in local backyards, like dandelion and nettle, make tasty dinner ingredients. Federal and state parks each have their own set of rules about how much people can harvest for personal or commercial use, so novice foragers should check with the applicable parks service before heading out.

David Blaine, owner and chef at Central Food in Kendall Yards, says the morel boom has sparked new interest in the commercial foraging industry. “This year is going to be a real gold rush. It’s going to be ugly,” he says. He receives several calls daily from morel hunters hoping to sell their goods. Blaine uses wild foods in his dishes, but because of recent legislation, he cannot buy them from unlicensed vendors — and that’s okay with him. “It’s a pretty Wild West culture and I think that the state is trying to reign that in,” he says. “Individuals can’t just go into the wilderness and try to get commercial products out of the woods without it being controlled.”

Not everyone in the industry adheres to the new standards. An underground market continues to thrive, which Blaine says drives down price and quality for everyone. Though health risks can be a concern, he’s more concerned that novices looking to make a quick buck will damage the environment. “A professional forager who has ethics is going to be a steward of the land, and when they harvest, they’re not going to be disruptive to the point of diminishing future harvests.” //

Erika Prins writes our Everyday Cyclist column. She wrote about her stolen bike in May. Read more of her writing at www.erikaprins.com.