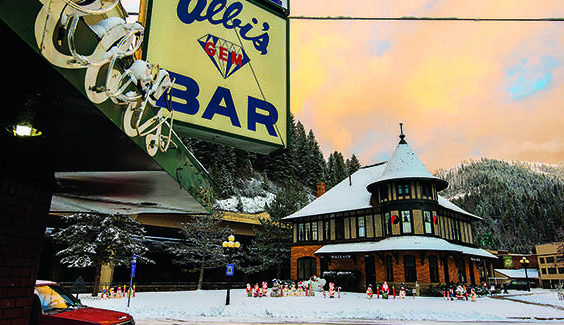 If you’re looking for your next spring ski trip basecamp, don’t overlook Idaho’s Silver Valley. The historic mining town of Wallace, Idaho, is garnering attention as a no-frills destination for skiers and snowboarders. Located in the Bitterroot Range of the Rocky Mountains a mere 15-minute drive from Lookout Pass Ski & Recreation Area and Silver Mountain Resort, both known for deep snowfall and plentiful dry powder dumps, Wallace is a sweet place to stay, ski or board, and take advantage of unique breweries, bars, restaurants, coffee shops, and lodging.

Tucked between steep, pine-covered hills, Wallace will give you easy driving access to spring powder dumps and soft, sunny groomers as well as some fun spring events, such as the in-town Craft Beer Pub Crawl or Leadman Triathlon at Silver Mountain Resort. The unique lodging and craft eateries with small-town hospitality are well worth your drive. You’ll also find deals around town when you show your lift ticket or season pass from Lookout or Silver. Added bonus: anyone skiing at Lookout or Silver can ski for FREE through the end of the season if they buy a 2019-20 season pass.

April is Craft Beer Month in Idaho, and craft brewers from around the region will come together in Wallace on April 20 for an epic pub crawl. Enjoy the historic buildings of Wallace as you taste and take a free trolley ride through town. Of the numerous craft brewers in attendance, microbreweries from the Silver Valley will be included, such as Radio Brewing Company, Wallace Brewing, and North Idaho Mountain Brew.

The craft beer journey begins at the Horseshoe Bar, where you can pick up your souvenir 16-oz. glass, wristband, and “venues & menus” map. You’ll get three free 4-oz. fills during the crawl! Designated drivers will be provided by local bars and Shoshone County Search and Rescue. Visit the Wallace Craft Beer Pub Crawl Facebook Page for more info. Tickets are $15 at the door, which opens at 1:00 p.m. Tickets may also be purchased by calling the Wallace Chamber of Commerce at  208.753.7151 or online.

The event is preceded by the Leadman Triathlon in Kellogg on the morning of April 20, and followed up by Wallace Fight Night USA Boxing Sanctioned matches at the Wallace Elks Lodge that night.

Before you head to the ski hill, grab a cup of coffee or Bloody Mary at Wallace Coffee House at 6th & Cedar. They have a full espresso bar and serve bagels, breakfast sandwiches, baked treats, and craft cocktails.

When it’s time to unwind, check out the City Limits Brew Pub, a spot serving great beer from North Idaho Mountain Brew as well as pub fare with vegetarian and gluten-free options. They’re in a beautiful building near the edge of town and close to the Trail of the Coeur d’Alenes. For downtown options, visit Wallace Brewing Company, which offers local brews and board games, or check out Fainting Goat Wine Bar and Tap Room, a classy spot with international wines, local beers, and from-scratch meals. Also notable is the Blackboard café, a gourmet eatery that’s perfecting the homemade grilled cheese.

Stay a While & Save

You’ll find historic and modern accommodations alike in Wallace, most of which offer deals to late-season skiers and snowboarders. The Wallace Inn has a ski and stay package for $134. The Ryan Hotel offers 15% off rooms for guests skiing on the hill. You’ll get discounts at North Idaho Mountain Brew and Wallace Brewing Company for showing your ski pass.

Catch the live theatre production of “Vintage Hitchcock: A Live Radio Play” at the Sixth Street Melodrama & Theatre from March 1-17.

Learn more about how Wallace is evolving as a ski town and other spring recreation in Wallace then book your spring ski getaway!