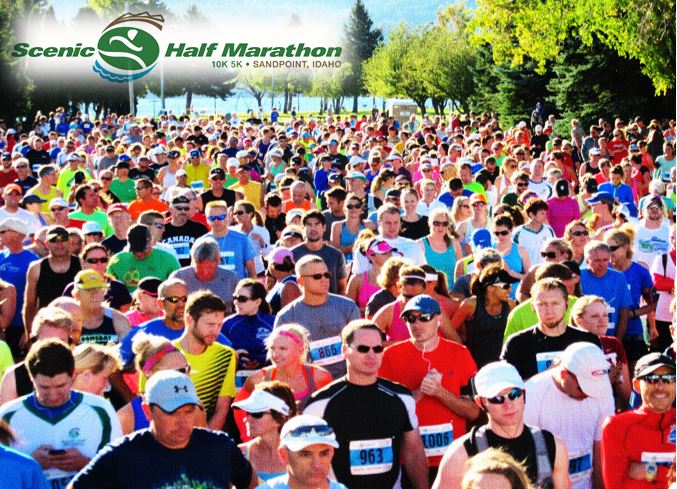 My first non-motorized experience with the famous Sandpoint “Long Bridge” didn’t involve crossing the bridge at all but rather swimming alongside it during the annual Long Bridge Swim. During the event, I periodically looked up to see my husband wave as he walked across the bridge with the other spectators while their loved ones swam the 1.76-mile length of the bridge. The event was fun, well-organized, and well-supported (and the post-race food was the best I’ve experienced at any event), but my runner’s legs are stronger than my swimmer’s arms, and I was eager to experience the bridge on foot. A month and a half later, I crossed the starting line of the Sandpoint Scenic Half Marathon, which begins and ends at Sandpoint City Beach. This event offers three distances: 5K, 10K, and half marathon. For the past several years, around 500 runners have finished the half marathon distance, which is a high enough number to generate pre-race adrenaline and excitement, and a low enough number that you don’t feel like you’ll get lost in the masses. The friendly, small-town atmosphere of this race feels personal and genuine, and both the runners and volunteers arrive ready to have fun.

The race organizers rerouted the half marathon course last year. Previously, after running the first 10 miles out over the Long Bridge and then south toward Sagle and back, runners would return to the Sandpoint City Beach only to be sent back out on a quick 3-mile out-and-back along the northward Creekside Trail. After catching a mocking glimpse of the finish line at mile 10, I found that last 3 miles more punishing than all the rest. Now, after first crossing the Long Bridge, the new course takes runners west along Lakeshore Drive and back, which introduces more hills but eliminates that final 3-mile out-and-back of previous years.

The event is organized by the Greater Sandpoint Chamber of Commerce, which donates a portion of the registration fees to Community Cancer Services, a local nonprofit organization that provides financial help and emotional support to anyone in Bonner or Boundary counties with a cancer diagnosis. For more information, visit Scenichalf.com. //

Janelle McCabe is a Jill-of-some-trades, master-of-none who writes about the Inland Northwest outdoor and active community. She wrote about the WunderWoman Triathlon and the Coeur d’Alene Scenic Challenge Triathlon in August.