I am twelve miles into a 35 mile day, and I haven’t stopped grinning since the first step. We’re running through the fields of Indian Henry’s Hunting Grounds, where the awe-and-amazement factor heavily outweighs the what-have-I-got-myself-into factor.

This particular adventure began with questionable idea #281: Run around Mount Rainier’s aptly named Wonderland Trail ad hoc in three days. By “ad hoc” I mean there was about .00065 seconds of rational consideration that focused mainly on whether or not I had enough Band-Aids in stock before deciding to do this.

I called my Seattle friend, Christi, to see if she had some beta on the trail. This resulted in her promptly inviting herself because she’s the kind of athlete that can just up and run 93 miles. Christi came up with the genius idea to glamp (glamour camp: identified by luxuries such as pillows) by having a friend drive a car to the destination campground each night. Thus, our party became three with the addition of Rufus, master camp finder and tent pitcher.

Endurance mountain runners (or so I might label us) are strange looking people. They wear compression socks and shorts, little gaiters to keep rocks out of burly looking shoes, and then slather enough greasy sunblock on to slip from the grip of even the most determined bears. Incidentally, this is not your ideal hitchhiking outfit, as I later discovered.

Christi and I hit the trail at 7 a.m. the first day, and by 7:15 we were lost. We like to start all our adventures this way. Bushwhacking around a bluff adds a Lewis & Clark air of authenticity to any journey.

However long your bucket list is, add the Wonderland Trail to it somewhere near the top. It is a delightful expedition across landscapes extraordinaire, through blossoming fields of color, mountainous ridges highlighted with bear grass, clear alpine lakes – all shadowed by the dramatic peaks of Mount Rainier. And a lot of mosquitoes. Which is kind of how you pace yourself. If you’re going slow enough for them to land on you, you’re not going to make camp by nightfall.

Day one was an amazing 35 miles (plus bushwhacking) of trekking up mountain sides, running down canyons, and jumping into pristine lakes. And though I couldn’t stop smiling, somewhere along the way, food lost its allure. When I couldn’t eat dinner post-run, I knew something was amiss. A run like that makes tree bark and road kill seem appetizing. 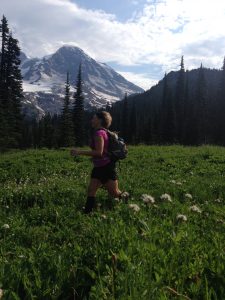 Day two began with denial of a stomach flu and a climb through picturesque Spray Park. It’s like a post card, only you can hear the glaciers cracking. Had I not been preoccupied with my growing desire to vomit, I surely would have shed tears of appreciation.

The inability to eat anything was becoming a problem as we approached that Point of No Return. Christi and I stopped to feed the mosquitos and have an intelligent conversation about options.

Fact: You cannot run ultra-marathons around mountains without eating. Also, friends do not appreciate interrupting such trips with life flight rescues for sickly cohorts.

It is a hard thing to make a bail decision mid-adventure, but in my experience, much can be salvaged by making the right decisions at the right time. Christi would run on while I ran out and hitchhiked to camp. Because hitchhiking through rural Washington in filthy knee-highs makes any adventure legit.

Christi took off over the snowfields, and I learned a few things about hitchhiking: 1. People will stop to tell you why they can’t stop to pick you up. Usually it’s because the dog is in the back seat.2. It is hard to get picked up when you look like a cross between a rodeo clown and a dust bowl hooker. Even if you smile to show a full set of teeth. 3. The most unlikely people will pick you up and treat you like kin.

The latter point was proven when a Vietnamese family (of 13) picked me up in their Toyota rental car train. They squished my salt-grit body between Grandma and Grandpa, who spoke no English but nodded approvingly at my presence, kindly cracked the window, and tried to not breathe for twenty miles down the dusty, windy road while I tried not to puke in Grandma’s lap. I’m not current on Vietnamese culture, but I’m guessing tossing your cookies on the family matriarch is frowned upon.

Several rides and odd experiences later, I arrived at White River. Christi came in just behind me, as perky as when she started ten hours earlier.

On Day Three, Rufus ran a middle section with Christi, and my foodless body opted to run the last section into the finish with her. We ran those final miles toward Longmire with the same girlish chatter and enthusiasm we’d had days ago.

There were epic views, swims in mountain lakes, and deep sighs of appreciation for our bodies and the nature they transport us through. We fantasized about carbonated beverages. We declared our misadventure nothing shy of spectacular.

For a trip that somehow went wrong, it sure ended up just right: Christi with a complete circumnavigation of Rainier, Rufus learning a thing or two about trail running, and me five pounds lighter.

Ammi Midstokke lives in the forests of North Idaho where she spends much of her time getting lost on well-marked trails or embarking rather unprepared on random misadventures in the outdoors. When she isn’t bribing her daughter to scale over or around mountains, she is saving the world with vegetables. More words from Ammi can be found at outtheremonthly.com or her website, twobirdsnutrition.com. (OTM). //