Sarah HaugeNovember 12, 2018Get Out ThereSkiing/Snowboarding
Kelli Christopherson on an epic powder day at Lookout in February. // Bob Legasa

For Mary Heston and her family, Silver Mountain Resort is home base. It started two decades ago, when she and her husband, Tom, moved to Idaho’s Silver Valley with their young kids. “It was pretty funny. As a young family, with four kids, we outfitted all of them first,” she remembers. “Then Tom would go skiing in his fishing gear! They could spot him a mile away in his yellow fishing pants.”

Living a few minutes away from the mountain and with Tom working on ski patrol, they became passholders in 1998. They’ve continued ever since, giving their kids season passes for Christmas gifts.

“Pretty soon [our kids] decided, all four of them, that our family tradition should be opening presents on Christmas Eve so we could get up early on Christmas morning and go skiing together,” Mary says. “It’s always fun to see the other families up there on Christmas Day.”

The four children, three boys and a girl, grew up skiing and snowboarding, and have since branched out from home. Tom travels more for work these days, too. But Silver Mountain always brings the Hestons back together. “Our family is starting to spread out,” says Mary. The kids are now in their 20s and early 30s, with some in college; there’s even a grandchild. But as other things change “we still call that home,” she says of Silver. They spend not just Christmases there, but love other traditions like spring skiing (the resort staff “fire up the barbecues—and you can ski in your shorts,” Mary says) and picking huckleberries in the summer. Using their passholder discount, they’ve often booked visiting friends and family in rooms at the Morning Star Lodge. “We call that the family annex,” Mary says with a laugh.

“We love everything about it,” she says of Silver. “That’s the crux of it—lots of good family memories and traditions, and it brings us back together.” 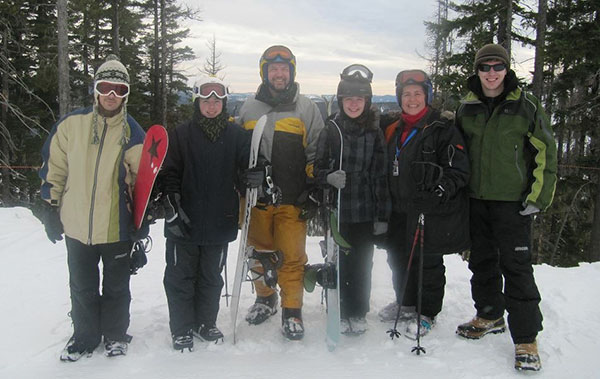 For the past 15 years, Doug Burke has been volunteering on the slopes at Mt. Spokane, working with the Powderhounds Ski Program. This multi-week lesson group is for individuals with developmental disabilities and is run at Mt. Spokane with the support of the City of Spokane Parks and Recreation Department. In addition to his wife and daughters, Doug first got involved with his son, Kyle, who has Down syndrome.

In the beginning, Kyle was 13-years-old and had never been on skis. “His first year or so, he didn’t want to ski really, he just wanted to lay in the snow and eat the snow,” Doug says. But “once he saw others having fun, he started on his way.”

“It’s a wonderful program,” Doug says. The Powderhounds primarily consists of people with cognitive delays, from children up through adults. Trained volunteers are partnered with participants, and ski and snowboard together on consecutive Saturdays through the winter.

Alice Busch, Therapeutic Recreations Director for the City of Spokane, has seen the Powderhounds help participants increase their physical and social skills as they get outside and do something non-electronic, all the while developing independence. “One thing that happens continually is the growth we see in students when they accomplish goals,” she says. “The volunteers are amazing instructors, friends, and advocates.”

“We have an absolute blast,” says Doug, who has recruited many friends over the years to volunteer and help grow the program. On those Saturdays between January and February that they’re on the mountain, he sees a change in the program’s participants. On the slopes, “they don’t have a disability, they’re just skiers or snowboarders,” Doug says. “It’s a fun, fun program and you can see it in their faces.”

Growing up with a parent in the Air Force, Jason Graham first learned to ski in Germany. Then “at 15 or 16 I got a snowboard and never looked back,” he says. After moving to Spokane he continued snowboarding, with a season pass that brought him to 49 Degrees North every weekend.

After high school, though, it wasn’t so easy to get to the mountain. When Jason started college he found himself “slowing down a little bit” with the sport; it was no longer an every-weekend thing. “I really missed it,” he says. He wanted that to change, and thought about how to find “purposeful involvement” that would get him back on the slopes regularly. After looking into both teaching and ski patrol, Jason became a snowboard instructor at 49.

Jason now teaches snowboarding every weekend during the winter season. “I love sharing the passion for it,” he says of working with new snowboarders, sometimes one-on-one and sometimes in small groups. “I love the ‘a-ha’ moments when kids learn. I love seeing the variety of people.” Sometimes someone very athletic will struggle to get their balance, while someone else with zero sports experience will unexpectedly excel. The surprises make it fun. “Someone you’d never expect to just picks it up out of nowhere,” he says.

His own young children have started snowboarding, something he hopes they’ll continue to grow and develop in as they get older.

Getting re-engaged with snowboarding has changed the shape of Jason’s weekends and given him a way to pass something he loves on to others. “Like everything else, it’s easy for life to take over and not have time for things,” he says. Instructing has changed all that. It’s good to be back up at 49 “every weekend, making it a regular part of my life.” 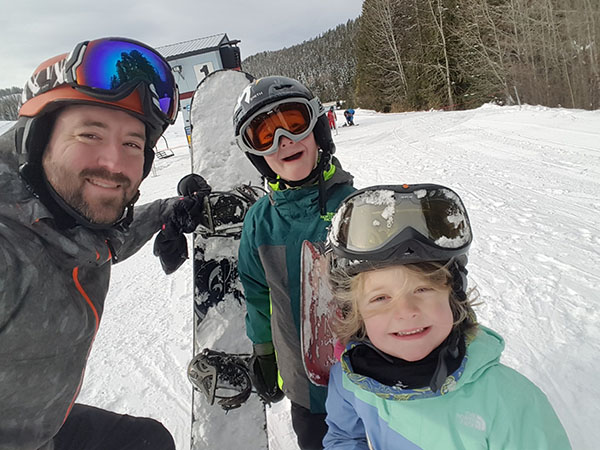 Jason Graham with his kids at 49 Degrees North. // Photo courtesy of Jason Graham.

“We’ve been skiing there since it was just the one chair, so I would guess 2003,” says skier Kelli Christopherson, who, along with her husband, Josh, calls Lookout Pass her home mountain.

Josh taught Kelli how to ski, and years ago they got into racing—competing as masters—and visiting all sorts of mountains and resorts.

“Through racing, we kind of got to shop around [different mountains] and we kept going back to Lookout because of the people,” Kelli says. Back when she was a newer skier, Josh advised that she always ski with a buddy. “It was one of the big rules, that I would never ski by myself,” she says. “Over the years obviously I got better, and he actually started being an instructor, and when we would go ski he would be busy.”

It was never difficult to find a new friend at Lookout. “It’s fun to ski by yourself, but the locals, the guys who ski there, it was just kind of like a family. They were like, ‘Oh, you should go ski with us,’” Kelli says. “I like the small mountain feel.”

She also loves the quality of the conditions—“They’ve always got good, soft snow,”—and the fact that, somehow, Lookout always seems to be about the first mountain to open and the last to close. Last year, they opened on November 4.

You’ll find her skiing off of Chair 3, where they leave the bump runs up all year. She likes Big Dipper, Hercules, and Purgatory. “It’s definitely steep and fun,” she says. “I like to challenge myself. That’s where I like to hang out.”

Kelli is considering becoming a ski instructor herself, another way she can plug more into the community at the mountain. “They’re trying to rope me into it,” she says with a laugh.

“It’s the people there,” says Kelli. “It’s the community that makes the difference.”//

[Sponsored by Ski the NW Rockies.]