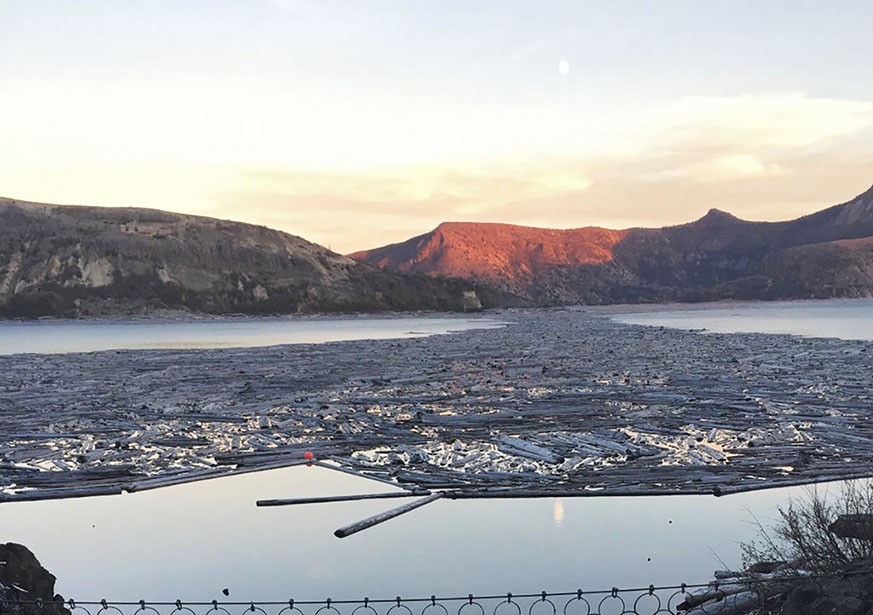 Forty years after the famous, devastating eruption, Mount St. Helens hosts a new struggle that pits the science community against the U.S. Forest Service and the Army Corp of Engineers. It’s a unique entanglement that involves the land, the lake, and a Spirit Lake tunnel created in 1985 to serve as an artificial outlet. Spirit Lake received the full impact of the 1980 blast and acted as a debris field for the volcano. Most of the lake water was expelled by the blast; however, the lake reformed with almost 400 million cubic meters of displaced timber from the mountain. The new lake’s surface area nearly doubled to about 2,200 acres, and its sole outlet, the North Fork Toutle River, was buried under roughly 600 feet of debris. The situation was extremely dangerous because if the lake basin filled, the lake could overtop the debris field and radically destabilize it, unleashing another devastating mudflow that would send millions of tons of sediment toward the towns of Toutle, Castle Rock, and Longview.

Eventually, Spirit Lake was stabilized with an 8,465-foot-long gravity-feed tunnel that cut through Harrys Ridge to South Coldwater Creek. Unfortunately, that ridge has continued to move each time Mount St. Helens moves throughout the decades. Twelve faults and sheer zones have squeezed and buckled the tunnel, causing engineers to close it several times for repairs. During one closure in the winter of 2016, Spirit Lake rose more than 30 feet. “It was definitely a wake-up call,” says Chris Strebig, a project director with the U.S. Forest Service, the agency that oversees the national monument.

Rather than wait for a crisis or emergency, the Forest Service has decided to open up a second tunnel. This requires the Forest Service engineers and scientists to drill into the debris field to find the best option, and they need a road in order to move equipment around the debris field. But some ecologists, scientists, and conservation groups oppose the road. It was in a large part at their urging that the federal government created the monument in 1982, setting it aside as a place for “geologic forces and ecological succession to continue substantially unimpeded.” Many plots and experiments from 1980 are still studied today. In many minds, if you drop a road over the Pumice Plain, the research there would effectively be reduced to how life responds after a road is built. And the friction between the two sides is heating up with each new proposal from the Forest Service. Developments and plans have been put on hold for the moment, but it looks like Mount St. Helens could be the epicenter of another flare-up in the coming months.

Click here for more information on the new proposal.