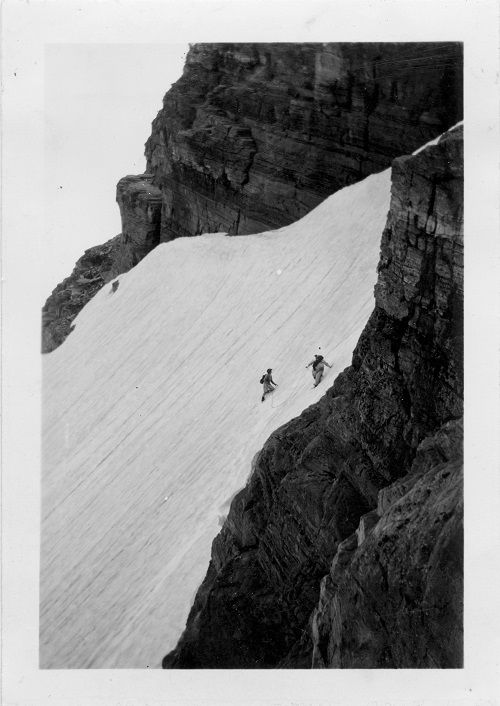 A special meeting of the club was called to liquidate the lodge and property. Property taxes this year were a staggering $3.80 per year. Mabel Gould was in on the exodus of members that left the club to form the Hobnailers hiking club because of disagreements over the lodge and Mount Spokane property issue. (Although in 1964 Mabel rejoined the club.) Club membership took a drop in 1952 with the Hobnailers split, leaving 76 members.

The year 1953 brought night skiing to the Mountaineers property on Mount Spokane, which the club decided to keep. The total cost of the Mount Spokane lodge to date was $3,009.46, and the club membership grew by one, reaching a total of 77 members. The club also bought its first nylon rope for climbing, and after 12 years, club members climb Chimney Rock again. The summit party consists of Ken Henderson, Bob Pfeiffer and Bill Fix.

The 1956 summer outing is held at Cascade Pass in the North Cascades. Climbs include Sahale and Magic Peaks. The first ascent of Glory Mountain (7,300 feet) by Dick Whirmore and Bill Fix also took place during this summer outing. Also that year, the first successful ascent of Mount Shuksan by the Spokane Mountaineers is completed. A special showing by Dee Mollenaar on K2, Fred Beckey on Everest, and Ralph Nelson on Mt. Kilimanjaro is held with the assistance of the Spokane Mountaineers. The club buys one manila and one nylon rope, while 35 students from Gonzaga take the club’s mountaineering school. The summer outing of 1958 is held at Moraine Lake in Banff National Park. Eighteen attend at a cost of $40 per person for the all-inclusive trip.

Club members who become honored members of the Mt. Spokane Ski Patrol that year are Ken Henderson, Don Johnson, Opal Dale, Helen Stowell, Lydia Savudoff, Roy Thoma, Stan Bauer and Gene Gibbs. The idea of a Spokane Mountaineers yearbook is launched, and a call for articles and photos are requested. First ascents include the north face of Chimney Rock led by Wendal Morgan, and the north wall of Roman Nose led by Don Bergman. Member Dorothy Ferrier turned heads when she introduced women’s shorts as appropriate women’s hiking garb. And the biggest news of 1964 was the passage of the 1964 Wilderness Act. In this declaration, the Cabinet Mountain Primitive Area became the Cabinet Mountain Wilderness. This wilderness has been visited for years by club members and was such an important range that it was part of the original 1964 Wilderness Bill.

The first mention of John Roskelley appeared in the 1965 club newsletter, the Kinnikinnick, early in the year. New members this year included Chris Kopczynski and Marion Krauss. Membership grew by 16 to reach 166. Chimney Rock saw its first ascent of the East Face by Ed Cooper and Dave Hiser, which took two days to complete. John Roskelley and Chris Kopczynski did the same route shortly after in a mere three hours. That year 13 mountaineers also climbed the difficult east face of Snowshoe Peak in the newly designated Cabinet Mountain Wilderness.

This is #4 in a series of Spokane Mountaineers historical highlights. Learn more about the club and its events and outings as members celebrate 100 years at www.spokanemountaineers.org.