Leaf, Root, Fungi, Fruit: That Weed in Your Yard (Gobo, aka Burdock) is Tasty 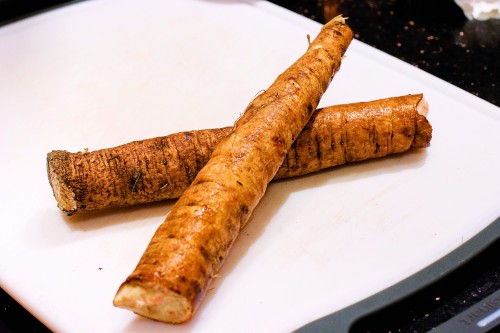 Eat it for the name alone. Known in English as Burdock, this common weed, like much of what proliferates outdoors, is not an original part of our landscape, arriving with British settlers hundreds of years ago. In my youth gobo was a favorite food. It came marinated with sesame seeds on small side plates at traditional sushi joints. My mother served it steamed with other root vegetables, and at the Zen monastery we lived by, it was sliced into soup.

Some folks don’t like its fibrousness. I find the chewy texture, earthy minerality, and artichoke aftertaste draw me inward like the smell of a dessert or subtle incense. The leaves and stems can be eaten, but I haven’t tried that yet. From experience, if you see the words, “can be eaten,” it generally means in the case of starvation or watching your partner grimace. However, when camping, the leaves are used like those of the banana for wrapping food and cooking on coals or a grill. It also predates hops in brewing recipes of yesteryear.

The burdock plant is also a staple amongst natural healers for numerous ailments going back millennium, with a focus on blood purification and skin issues, and is still widely used. FYI, it’s prudent to limit the consumption of potent or medicinal foods.

Burdock is recognized by a rosette of large (often over a foot long) wavy, lobbed, heart-shaped leaves with whitish fuzz on the bottom. Late summer it becomes the culprit behind the round sticky burrs we collect on our beloved sweaters – the bona fide originator of Velcro, produced in the second year after stem and flowers come forth. First year vegetation stays low to the ground and puts its energy toward nutrient production. It can be harvested in this first year with spring offering smaller roots and deeper flavor in the fall.

You’ll find the plant in riparian and disturbed areas. Nearby rural environments are perfect hunting grounds, though it may be growing in your backyard, so look there first. You will need a spade as the roots are often deep and plunging through rocky soil.

Unlike many wild edibles, don’t fret about overharvesting. Burdock is prolific, and the more you eat, the less cockleburs to groom after a summer outing. Animals fall victim too, especially birds. Besides, the eating of opportunistic species is finally being implemented as a best practice in managing tenacious populations.

Gobo can also be purchased at our local Asian and natural food markets. If you want to order it in a dish, head over to Syringa in Coeur d’Alene, the most authentic sushi restaurant around, where it’s served as a side or in maki. 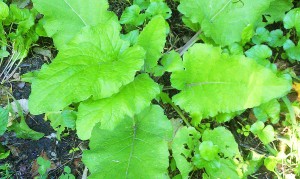 Look-alikes: Rhubarb has solid stems and the poisonous leaves aren’t wooly. It doesn’t grow wild but can be found around yards and farms. Mullen, which is medicinal, grows in large rosettes but is differentiated by fuzzy topped elliptical leaves.

Culinary Attributes: Clean earthy flavor. Satisfyingly chewy if you enjoy feeling like a grazing animal, which I do. Lends itself well to Asian flavorings. Think stir-fry, soups, steamed sides.

Wine Pairings: None. It’s an ingredient. If in an Asian dish, pick up dry sparkling wines, Loire Valley reds or a cider. //