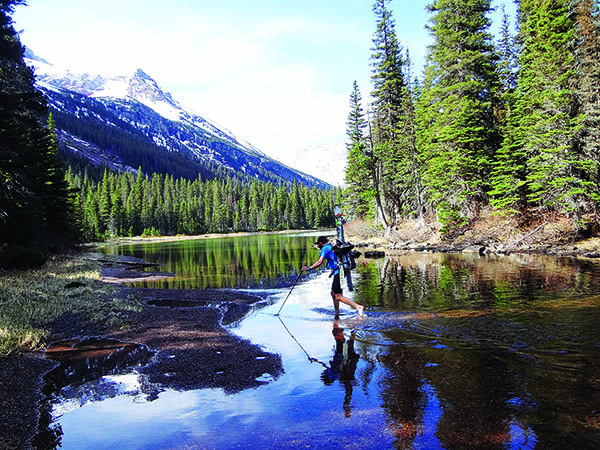 Step One: Have success on a recent outing. In our case, Kevin and I had enjoyed delicious corn skiing on four ski descents the day prior, scoring great skiing conditions throughout the day and linking up turns down the Lena Lake Couloir, Red Crow Peak and Calf Robe Mountain in the seldom-visited southeast corner of Glacier National Park. In fact, so seldom is this area visited that the trailhead is a pullout along Highway 2, and the entrance to the park involves a quick jaunt over some train tracks.  It was one of those rare spring days in the backcountry where the skier is treated to soft corn snow from the first run to the last.  Besides the Logan Pass area, skiing in Glacier National Park is generally not an easy outing. Getting to ski the Lena Lake Couloir, followed by skiing off two summits, was truly a treat.  An ass kicking was sure to follow.

Step Two: Have an excuse.  During our previous day’s outing, I had noticed something odd on our ascents of Red Crow Peak and Calf Robe Mountain: I was summiting before Kevin.  I had met Kevin while he was a Physician’s Assistant student at the University of Washington’s MEDEX program in Spokane a few years prior, and he immediately became one of my favorite ski partners.  Kevin was a collegiate long distance runner who had succumbed to the pull of the mountains a long time ago.  Needless to say, Kevin was usually quite a bit faster than me on the ascents.  To find myself on the tops of these peaks before him was an anomaly.  Something was off, and he would later admit that he was feeling sick. We had our excuse. 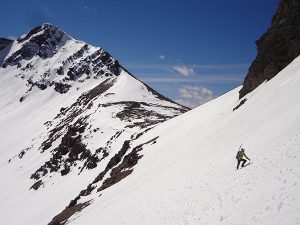 Step Three:  Make a mistake.  We took off from the Swiftcurrent Trailhead in the Many Glacier area of Glacier National Park in silence.  Kevin had voiced concerns about feeling sick but still wanted to give Allen Mountain a try.  We had a good amount of dry miles to cross before we would hit snow and begin our ascent, so we kept trying to push the pace faster.  We closely studied our map of the area beforehand, and the path to follow seemed obvious.  Yet, when we came to the first turn, we missed it.  A half mile later, we were on the wrong shoreline of Lake Josephine.  We realized our mistake but neglected to correct it.

Step Four: Fjord a stream.  If you find yourself with your pants off, skis on your back and feet in freezing cold water, you’ve failed.  Never have I had success after finding myself bent over with nauseating pain as the feeling rushes back into feet that have just been subjected to ice-cold water.  A lack of detail in our map showed that we could simply walk along the west shore of Lake Josephine, bushwhack a short distance up the hillside and soon regain the trail we had missed.  In actuality, we had to fjord a stream that connected Josephine and Swiftcurrent Lakes and bushwhack through thick alder.  This time-consuming penalty would be our final blow. 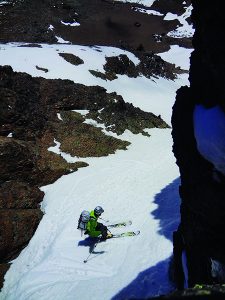 Step Five: Commit to failing. When Kevin and I finally regained the trail we had missed, it was obvious that we had taken too much time.  The rising sun and increase in temperature were taking their toll, and we were still too far from our goal.  It was time to find another option.  We had spied from the parking lot some good skiing north of Allen Mountain on the ridgeline now directly above us.  A few quick hikes down and back the trail and we found what seemed like the easiest means to gain the snow.  Another quick, but more forgiving bushwhack, and we clicked into our skis and skinned up a slope, traversing south to what appeared to be the longest continuous snow patch we had seen earlier that morning.  Soon we were under our slide path; the incline was such that booting straight up our run was going to be the fastest and easiest option.  Skis strapped to our backpacks, crampons strapped to our boots, one foot after another, the climb continued. We had failed, but plan B was shaping up to be a pleasing consolation prize.

Step Six: Enjoy the failure.  At some point after you’re committed to failing, you will embrace it, and despite the feelings of disappointment, you will realize that you are still in a beautiful place with snow to ski as far as the eye can see.  As we continued to climb up towards the ridgeline, the disappointment of not obtaining our day’s objective soon dissipated as some of Glacier’s largest peaks surrounded us.  The beauty seeped into our pores. Soon we were sitting just below the ridge enjoying snacks and marvelous views of Mount Grinnell, Angel Wing and Mount Gould.  Our day’s objective was soon forgotten as we linked one glorious turn after another through supple, sun-kissed snow.  2,400 vertical feet delivered down a consistent pitch made for a memorable failed attempt, but I guess that is just the way it is skiing Glacier National Park. //