Go ahead, judge. We do shake our booty, often in minimal clothing, and the founder is a lean blonde celebrity trainer named Bizzy Gold. Obviously not real yoga. Obviously shallow. This is why the meaning of Buti, the hidden cure, is so apropos. It exemplifies the current zeitgeist of shedding preconceived ideas and belief systems. It also exemplifies a revolution of experimentation and optimization that impacts everything from computer apps to relationships to commerce to cooking techniques. In fitness, Buti is this revolution. Gold declares, “We are industry disruptive.”

Initially teachers were weary, or even outright scornful, feeling it was an abomination of the thoughtful inward nature of Yoga. In Spokane Buti was championed by Tera Bailey, a hair stylist, belly dancer, and yogini. Behind her calm unassuming smile, Bailey is an iconoclast who likes to push the edge of conventional thought. She gets fired up when talking about Buti.

“I took a training to try something different and thought it would be fun, though was a little of a yoga purist and figured it might not be real yoga. I realized right away it was one of the deepest yoga practices out there,” she says.

She started teaching at Abide in the Gonzaga University district, where the first certifications took place, and can also now be found at Yoga Shala. “I didn’t care at all that people believed it wasn’t legit—I knew it would prove itself.”  Her efforts, along with subsequent trainings in Spokane and Walla Walla, have blossomed into a growing group of instructors and students.

Seven years ago, Bailey became a certified yoga teacher with Lara and Lee Bear Tobin at Lila Yoga. She loved their free moving, spiritually-driven flow class and wanted to use yoga to help heal people, so she co-founded Coil Studio.  Her belief that yoga can “save the world” led Bailey to work with inmates at Geiger Corrections and recovering addicts, then to sign up for a two-year program in yoga therapy.

“Yoga is the most radical activism because people don’t see it coming—they just think some little yogi is going to come in and do stretches. It transforms you from the inside out and therefore you don’t reject it,” she says.

Class begins sitting, with spiral motions to activate kundalini, get energized, and warm up the spine. The momentum grows with the music, which always carries a strong steady beat to synchronize the group and bring you into your body. By the time you’re standing, the party’s on. Lots of twisting, fast footwork, shaking, and swinging.

The vigorous organic practice elicits our primal nature and is a reminder we are animals. It teaches you to be in the groove, even those of us afflicted with White Man Dance. An emphasis on spiral movements, opposed to linear ones, targets a larger range of soft tissue development. Sections mimic High Intensity Interval Training to increase metabolism. The manual states, “Buti Yoga is a soulful blend of power yoga, cardio-intensive tribal dance, conditioning, and deep abdominal toning.”  My body has never felt safer in a workout and its minor back, hip, and knee injuries have mostly gone away; other students share similar stories.

People who are hesitant to try Buti Yoga share common refrains. Men tell me they’re apprehensive about it being sexual and therefore uncomfortable. Woman will say it’s “just twerking” or point out the minimalist outfits. But to participants Buti is completely non sexual. Its tribal expressiveness unifies the class and the shaking and vibrations “release stored trauma and stimulate the body to change, amplifying the power of the experience.”

Another concern is difficulty. However, the encouragement of teachers, lack of seriousness, and heartbeat rhythm of music will invigorate and carry you through. And yes, men can do it, too. Buti was started for both genders but was co-opted by women because it was so empowering. Now men are increasingly joining, and the organization is actively using verbiage to include them.

After class one day, “Butisattva” Marnee Setty, piped up. “It’s not rigid, not one way to do it. Each person is encouraged to have their own style. Instead of feeling awkward if you accidentally touch someone or step on their mat, we foster connection: calling out, bumping into each other, communicating.”

Bailey chimed in, “As the teacher, you get to put your own medicine in.” All this underlines the strong tribal emphasis of support, playfulness, and personal expression. It’s soulful. Buti is the most fun fitness class I’ve ever been in. For your first step into Out There’s new Way Out There section, join us, get down, let go.

Classes are available at Yoga Shala on Tuesday and Thursday at 7:30 p.m. For private classes, reach Tera on the Spokane Buti Facebook page. //

Editor’s Note: Interested in the eccentric, mysterious, and magical side of life and nature? Look for Out There’s new “Way Out There” dive into topics ranging from counter culture expressions to regional mysteries and lore in every other issue.

Kelly likes scrambling up rocky hillsides, gliding through the trees on powder, and studying life forms in all their evolving niches. 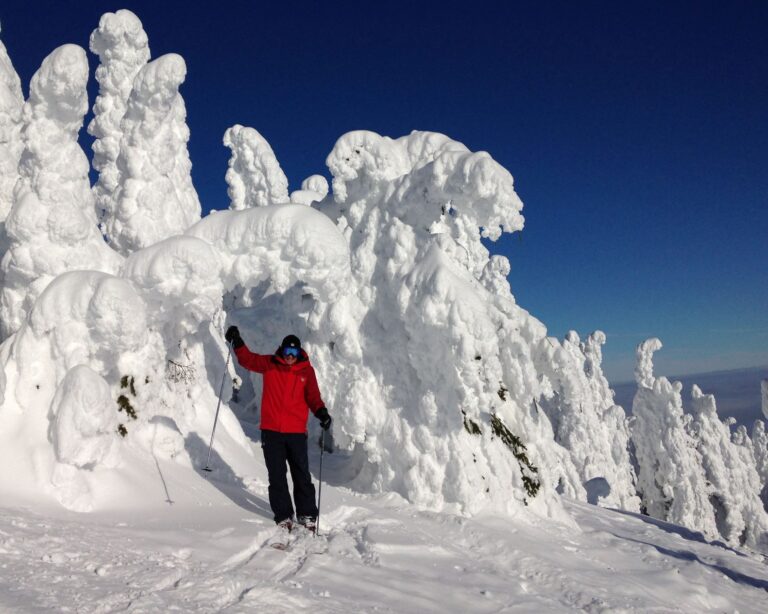