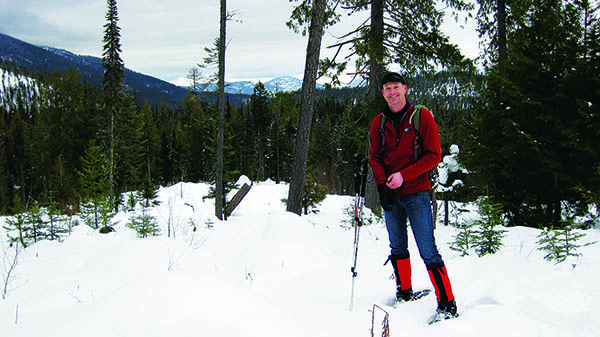 Two months after we moved to Coeur d’Alene in 2008, the Inland Northwest received a heavy dump of fluffy snow. The morning after, my husband Young donned his cane snowshoes and vintage Outdoor Research Crocodile Gore-Tex and Cordura gaiters and trekked across town to open the Starbucks where he was then employed. Those gaiters kept his boots completely dry and warm, as they have for 20 years.

Young purchased his trusty OR Crocs in 1996 at the Grand Teton Adventure Store in Jackson Hole, Wyoming. “I was removing snow from roofs in the south gate of Yellowstone,” he recalls, “and I needed something that wouldn’t make me super hot, but would also protect my legs.” He loves their simplicity, and his favorite feature is the clasp at the top (instead of a tie) that prevents bunching while keeping the gaiters secure. He admits he spent a good sum of money on them, but he needed something that was durable.

And endure they have. Young has used his gaiters for alpine and Nordic skiing, snowshoeing, hiking, shoveling, and slushing. They have traversed the Colorado Rockies, Wyoming Tetons, and Coeur d’Alene winter streets. “I have never had a snap break or a shoe release hook break,” he says. “They have lasted this long, have done an incredible job, and probably have a lot more miles in them.”

OR still makes the Crocodiles, and they still come in Chili/Black, the color Young chose for his little workhorses. In fact, these gaiters, the first OR ever made, have been winning awards for years, most notably Backpacker.com’s Editors’ Choice Gold Awards in 1999 and 2010. They are tough as nails, and I expect they’ll continue to keep him warm and dry for many years. //