From Big to Big Inspiration: One Woman’s Fitness Transformation 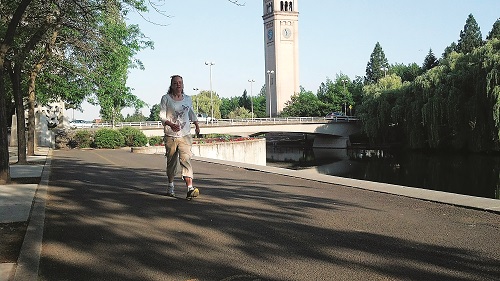 Many people would be short of breath if they tried to match Dawny Taylor’s brisk pace during her morning “wog” on the Centennial Trail. She calls it wogging because she walks as fast as a lot of people jog. And anyone who didn’t know her before would be surprised to learn that this fast mover used to tip the scales at 415 pounds.

Growing up, everyone in Dawny’s family was big. Whether it was passed off as being big boned or a matter of genetics, it was just the way it was. It was considered normal at home, which provided a safe refuge from the teasing and bullying at school. That began to change when she was 29 years old.

While stepping over a railroad tie she severely hyperextended her knee. For the first time in her life a medical professional informed Dawny she was morbidly obese. The irony of that particular situation was that although the doctor told Dawny she needed to lose weight, she also had to stay off her feet for three months. Afterwards, despite a custom made brace – which she says she can probably fit both legs into now – and crutches, her weight made it extremely difficult to get around on her weakened knee.

Name a diet and Dawny has probably tried it over the years. She knew she was fat, but was accepting of it because, again, that was how her family was. Also she never got on a scale to see how she was doing. A ten pound loss is not noticeable for someone weighing 400-plus pounds, but since she never got on the scale she had no idea if she was making any progress. Consequently, she’d grow tired of the diet and give up.

She felt sorry for herself for a couple of years, and it wasn’t until an aunt gave her some literature about Weight Watchers that she finally decided to take action. Dawny is not quite sure what changed, but something clicked. She joined the organization and learned how to balance her caloric intake. One example she gives is the larger, more fulfilling amount of plain popcorn compared to a bare handful of Doritos. Over the next two years she lost 150 pounds. She says that only after she lost 50 pounds could she actually tell she was losing weight.

Some life and job changes followed, and Dawny went back to making poor choices about her food and exercise. She began putting weight back on while she continued attending her weekly meetings at Weight Watchers. She rationalized her choices during the week and fooled herself into thinking she could just start over at the next meeting on Saturday. At the meetings, she always had an excuse, which the group leader recognized as such and always called her on it. But the group could not make Dawny change. She had to do that herself and she knew it. She doesn’t know what happened, but after one meeting she just started sticking with the regimen. She made it through the week and lost five pounds. The results were encouraging. And she started exercising.

Sit and Be Fit is an exercise program on public television designed for senior citizens. That’s where Dawny got her fitness start. For most people the exercises would seem so easy as to be considered ludicrous. For Dawny each session was an intense workout that had sweat running down her face. Her fitness level improved to where she would repeatedly go up and down a set of three steps. She would lay on her stomach, raise her arms and legs into a superman pose, and hold it for an excruciating 10 seconds. That improved to 13 seconds. Then 20.

After six months she joined a gym where she would walk on a treadmill for eight minutes at 1 mph. She swam in the pool and did water aerobics because the buoyancy made it easier on her joints. She progressed to working out with weights and getting on the elliptical machine. Then she started walking outside, which turned out to have the most appeal to her.

She slowly but regularly shed the pounds, and in May 2012, Dawny reached her goal of 155 pounds. She never had surgery to fix her knee, but now she doesn’t need to. She’s much healthier now. She feels better, and she feels better about herself. Morning wogs, Zumba classes, and weight training pep up her day with what she refers to as an hour of sanity.

Dawny has been with Weight Watchers for nine years, and she hates being asked how long it took her to lose 260 pounds. When someone needs to lose that much weight it seems like an impossible goal. But it isn’t if you focus on the little steps that get you there. Dawny tracked her lost weight in five-pound increments, and those little steps added up over time. But she admits it was a struggle for her. She started out strong, slipped, and then bounced back. Although she reached her goal last year, she actually lost far more than 260 pounds because of the times she weakened. Dawny does not consider herself cured. She loves food. She loves to eat. The challenge has been finding ways to make that fit into a healthy lifestyle. That, and wogging, is what she chalks up to her success. //