South of Lolo Pass, on the Idaho-Montana border, the 200-mile-long mass of granite known as the Idaho Batholith lies exposed on the Bitterroot Divide, like a half-extracted fossil. The advance of alpine glaciers during the most recent ice age sculpted this ridge into a series of rugged peaks and steep, incredibly straight canyons cut by swift-running streams, some of the Northern Rockies’ most rugged terrain. The largest wilderness area in the continental U.S. designated in the original 1964 Wilderness Act, the Selway-Bitterroot Wilderness protects 1.3 million acres — 2,000 square miles — of the heart of this landscape, and with it some of western Montana’s most iconic hikes.

Bass Lake: Bass Lake sits high on the Bitterroot Divide, its mile-long talus shores tucked at the head of an impressive U-shaped glacial valley. The lake itself, dammed for irrigation, is secondary to the beauty of Bass Creek valley: high craggy colonnades, rushing cascades, and sprawling streamside meadows. With the exception of a steep grunt in the final half mile to the lake, Bass Creek trail climbs gradually over its 7.7 miles, with several waterfalls and trailside attractions that make for logical turnaround points. Ambitious hikers can do the 15.4-mile roundtrip to Bass Lake in a day, but, like many of its Bitterroot canyon neighbors, Bass Lake is best suited as a basecamp for multi-day exploration. 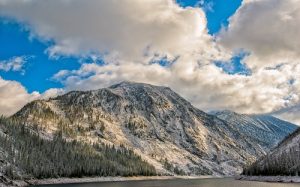 St. Mary Peak: Jesuit missionaries named the tallest peak on the Stevensville skyline after their Bitterroot Valley mission; on summer weekends, as many as several hundred hikers will make the 7.5-mile roundtrip pilgrimage to the 9,351-foot summit of Saint Mary Peak and its restored lookout. The hike is a popular destination for Missoula-area residents; if it’s solitude you seek, come mid-week. Better yet, come in late September: The steep, east-facing prow of Saint Mary Peak has one of the Bitterroot Valley’s best larch displays, an extensive intermixing of western larch and its alpine kin. But the view from the white clapboard lookout cabin (the second to perch on the summit since a 1952 windstorm blew the first tower off the mountain) is worth braving the crowds as you observe the orderly parcels of farmland in the Bitterroot Valley below, carved at right angles by roads, contrasting with the serrated mass of Bitterroot spires to the west.

Bear Creek Overlook: Peer into a grand, glacier-plowed Bitterroot canyon with a fraction of the effort of most trails in the Selway-Bitterroot Wilderness. The Bear Creek Overlook trail spends most of its two-mile length gradually switchbacking — and switchbacking, and switchbacking — through unremarkable lodgepole forest before wowing hikers at its very obvious end. From as close to the edge of the overlook — a smooth, wind-scoured slab of granite — as you dare, peer down into the deep canyon where the three forks of Bear Creek converge. Beyond towers the prominent pyramid-shaped peak of Sky Pilot. Mile for mile — and switchback for endless switchback — there may be no better hike for viewing the craggy interior of the southern Bitterroots. From here the seemingly endless pickets of the Bitterroots seem humbling in scale but close enough to reach out and touch. Just mind the 900-foot sheer drop. 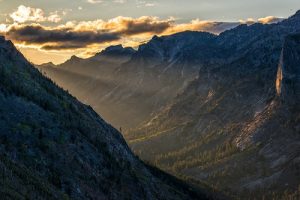 Blodgett Canyon Overlook: An easy jaunt to a breathtaking vista of a broad, glacier-cut chasm, Blodgett Canyon Overlook is where locals take their out-of-town guests and where photographers go for epic sunsets. The hike, just shy of three miles roundtrip, climbs gradually through open Douglas-fir forest and the brushy aftermath of the 2000 Blodgett Trailhead fire. At trail’s end, well-beaten paths weave through the rocky lip of the overlook to reach numerous viewpoints, all of them good. Across the canyon, 8,467-foot Mill Point caps Printz Ridge and its steep talus-strewn slopes. Below lies broad, nearly straight Blodgett Canyon, the story of ice-age glacial movement laid bare on its steep, U-shaped profile. There’s no better or easier way to appreciate the effects of ice-age glaciers on the Bitterroots landscape.

Lake Como: Most of the Bitterroots’ famed subalpine lakes require long canyon-bottom treks or steep scrambles. Not so for car-accessible Lake Como, north of Darby. Named by Jesuit missionary Father Ravalli after the resort-ringed lake in his home country of Italy, Lake Como occupies a vast glacial basin at the feet of the Como Peaks, some of the most imposing of the Bitterroots. Beginning in mid-summer, boats crowd Lake Como, but it’s easy to escape the throngs on the nearly level eight-mile loop that traces the lake’s shore. Open ponderosa forest and ankle-taxing talus slopes frame views of the Alps-like granite battlements of the Como Peaks, their east-facing couloirs often holding snow well into summer. As good as the escape is in summer, it’s even better during shoulder season in the spring when other Bitterroots lakes remain snowbound, or in the autumn when aspen provide close-up color. Alpine larch tower over granite-flanked lakes, with serrated, heavily glaciated peaks towering even higher: This is the quintessential Bitterroot Range. //