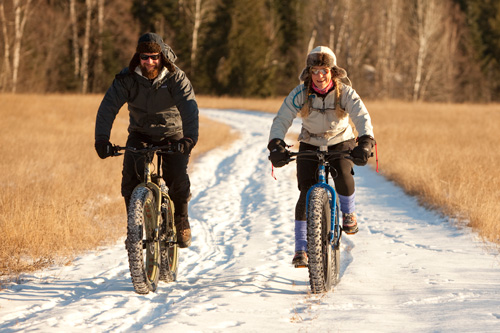 “It’s a balmy 11 degrees Fahrenheit down in the valley,” Brian tells me over the phone. I’ve been on the mountain skiing in wind chills that would strike fear into the heart of Shackleton, and though I haven’t counted my fingers yet, I’m pretty sure my nose is gone.

“I’m coming down,” I tell him as I assess my attire for biking appropriateness. This, of course, is a farce. Logic would tell us that riding a bike in meat cooler temperatures and snow is not appropriate at all. However, thanks to goose down and the ingenuity of companies like Gore and Surly, it is now impossible to consider biking a seasonal sport. Even in North Idaho. Thus I dress in no less than 14 layers of wool, fleece, down, Gore-Tex, Chap Stick, the token Siberian head gear and set out to meet Brian.

Brian Anderson is no rookie at riding bikes. Snow, dirt, pavement, bar sidewalk – Brian has not only done it all, but I’m guessing he’s got a bike for every type of terrain. In fact, I’m pretty sure he opened his own bike shop just to finance his riding habit. Upon entering his Greasy Fingers shop in Sandpoint,  it’s pretty clear this place is owned by a guy who loves riding and the community it serves.

Brian must be feeling rather kind today because he’s decided we’ll attempt our fat bike ride on the forgiving terrain of a local wildlife refuge. He has two Surly fat bikes loaded in the back of his truck, the shop dog, Shadow, and a hat almost as rad as mine.

Brian tells me that fat bike riding is synonymous with snowbiking and that it is “aerobic.”  While I always find bike riding aerobic, I recall that Brian’s last bike ride with me involved bar hopping in a toast costume and possibly some shots of tequila. It occurs to me that the flat terrain choice was likely for my benefit and not his.

It is a crisp day with bluebird skies. The wind in the valley is far less (i.e. my Buff isn’t freezing solid to the remains of my nose), and the snow is a powdery, sparkling white. I have “Winter Wonderland” stuck in my head as we get ready to mount our bikes. That, and fantasies of well-earned hot toddies.

I hop on my Surly. The bike, with just a few pounds of tire pressure, bounces a little under my weight. It has a shifter that is easy to operate with a fleece liner and a giant mitten no doubt designed for an Everest summit. I set my foot on the pedal, push down, and am instantly transported into a parallel universe of invincible snow joy. My grin is so wide my teeth freeze.

Fat biking gets its name from the fat tires (usually requiring a frame designed for such a large tire). They are wide, knobby, and use low pressure to aid in stability, buoyancy on snow, and traction. It feels kind of like riding a bike made of bubble gum. I was sure there should be some Mario Bros music in the background. It’s like being in a happy, pastel-colored video game where you rack up points by riding over frozen puddles.

We head out on a snow-covered road and I immediately notice how stable the bike feels. It doesn’t slip around, and it doesn’t notice branches, bumps, or ice. It’s like a man-powered ATV, rolling over and through everything without complaint. The arctic temperatures soon become moot because, even at 6 mph, I’m breaking a sweat.

We ride along the edge of a field, bordered by leafless birch trees and the frozen edges of a winding river. Shadow bounces around like a puppy, oblivious to her age. The sound of the tires crunching the snow beneath us is all we can hear.

Brian looks like some mountain hermit man with a beard that would make any pubescent adolescent jealous. In fact, I’m rather envious because I’m sure his face is warmer than mine. Between his own Siberian hat, old school Ray-Bans, and impressive mane, he looks like the epitome of winter fat biking. And a burly Russian snow assassin. 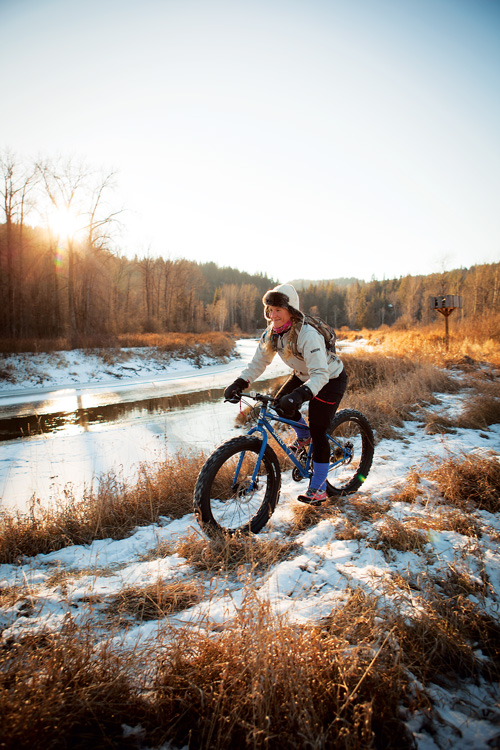 “When I ride my fat bike, I find myself giggling and smiling like a kid on his first bike,” he says as we happily crank past some pines. I blink. Do bad-ass biker dudes with tattoos giggle?  I suppose if they fat bike they do.

I can’t stop grinning as I pedal over snow, open fields, and crushed ice. The bouncy feel of the bike is so stable and sturdy, I’m convinced I could rip down anything in a Kamikaze descent and bounce off the ground as if it were Jell-O. Suddenly I am sure we can ride these bikes on ANYTHING like they’ve got magic powers, and I’ve got a super hero cape. Super Mario’s got nothin on me.

We puff up a hill, because any incline on a fat bike is going to be a puff. It’s not impossible or uncomfortable by any means, it’s just a heavier bike with a bit more resistance. If you can ride a bike at all, you can ride these babies.

The time goes by too fast. The sun is already setting behind the pine-covered hills to the west. I’m afraid the temperatures will drop so fast that we’ll have to pull a Skywalker move and crawl inside the belly of a warm carcass to survive. We roll to a stop at the crest of the hill and turn our bikes around. It’s all downhill from here. And now the fun really begins.

Down the hillside we careen, as reckless and carefree as happy children. I pedal my bike as fast as I can, legs like little motors, oblivious to the potential for disaster. For I am on a fat bike and thus immortal in this snowy world. We roll over all obstacles without regard, chilly wind lapping at our smiles and glove-covered fingers. Like some posse of wild snow cowboys, we fly around forested corners, lean into the hills, and come to an easy canter when we reach the fields again.

I can’t remember the last time I had this much fun. Brian’s shop has a floor full of fat bikes that could use a good home. I briefly consider my growing family of bicycles. Clearly, my garage has space for at least one more.