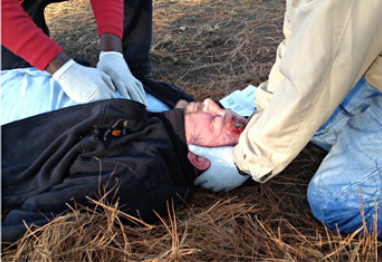 What’s the most important practice when it comes to backcountry safety? In brief, good judgment, which in turn comes from education and experience. Jason Luthy strongly recommends that before you set out on a sidecountry or backcountry jaunt, even if it’s just something like heading out of bounds at your local ski resort, you should ask yourself “how you are going to be aware of the risks that could happen, prior to things happening.”

Luthy is one of North Idaho’s resident experts on wilderness safety. An avid all-season outdoorsman, he is a certified EMT with a master’s degree in Experiential Education, which he puts to good use designing outdoor courses. He is the co-chair of the Idaho section of the American Alpine Club and the program director and owner of Longleaf Wilderness Medicine, which hosts various workshops for the prevention and treatment of backcountry injury and illness.

Avalanche Education
Specific to winter safety and off-piste recreation would be avalanche education. Avalanche risk depends on the degree of a slope, among a host of other things. Up to a certain grade, the more steep the slope is, the more risky it is. “Once the slope is very steep, it doesn’t hold snow or the snow is stable. Basically, the slopes that are fun to ski are the biggest avalanche risk,” says Luthy.

There are also snow condition considerations, which depend not only on the current weather patterns and the topmost layer of snow, but the freezing and thawing patterns of the snowpack underneath. Each winter, Sandpoint-based Selkirk Outdoor Leadership and Education partners with the American Institute for Avalanche Research and Education (AIARE) to provide courses geared towards staying safe in the backcountry, whether you’re snowshoeing, snowmobiling or splitboarding. Luthy says that AIARE provides some of “the best avalanche education in the country.”

Rock, Ice, and Rope Safety
A well-known benefit of membership with the rock and ice climbing oriented American Alpine Club (AAC) is the availability of accident insurance for rescue, but the organization has also begun a campaign to provide education to people spending time in mountain environments, says Luthy. An upcoming AAC ropes safety workshop designed for climbers that is free and open to the public is set for Sandpoint on March 2 at the Sandpoint Rock Gym. Luthy is also in the process of scheduling a workshop in Spokane. These “Know the Ropes” workshops will cover AAC best practices, including the basics of lowering and rappelling.

The AAC conceived the workshop because in climbing environments, lowering and rappelling are leading causes of accidents that are often due to something as simple as miscommunication and incorrect assumptions. For example, Luthy describes a scenario that could happen even on a casual day of sport climbing at the crags: “After cleaning an anchor, people lean back, and they think they’re on belay,” says Luthy. However, if the belayer on the ground assumed the climber was going to rappel and stopped belaying, “the climber would fall to the ground.”

Finding the Right Backcountry Partners
Luthy suggests that whatever activity you’re doing, you take people with you. Finding people to go with you if you’re inexperienced can be tough. Luthy suggests getting hooked in with an outing organization such as the Spokane Mountaineers, another organization providing education. “Going through a program like the Spokane Mountaineers, you’d know they have a similar skillset,” says Luthy. There’s also the possibility of meeting activity partners through a facility such as a climbing gym. “The gym provides an environment with less objective risk where you can get to know people prior to heading into remote environments.”

It’s safer “traveling with people who have similar goals as you,” says Luthy. Consider if you’re venturing into the backcountry with someone who wants to cover as much ground as possible, versus someone who wants to take it easy. If you “travel with like-minded people,” you’ll have a safer experience. That way, says Luthy, “everybody has the same skillset, but they also have the same idea of the risk they’re willing to take on.”

The “takeaway from all of it” in backcountry safety, says Luthy, is understanding the terrain you’re traveling in, year-round – whether that’s being aware that you’re in an area with a risk of lightening in the summer or understanding the potential for snow and ice-related injury in the winter.