Boutique Fitness: From Resistance to Respect

It is no secret that I am resistant to just about everything except coffee and cookies. As a health care practitioner, I feel it my civic duty to scrutinize every supplement, ingredient, therapy, protocol, and medication until I can confirm it has never been associated with cancer. Thus it was natural for me to resist Evie Fatz at LOTUS Fit By Design when she asked if I’d ever had personalized programming.

“You could be awesomer.”

Granted, this is a summary of our much more complex conversation. Also, I’m pretty sure she would never say “awesomer.” Having established in a single simple movement that my pushup quality wouldn’t get me through a week of boot camp without judgement, I drank the Kool-Aid. Resistantly, of course.

There are a lot of arguments for individualized training. Most of us think we’re doing it when we scale at CrossFit or design a unique training plan for our next race goal. Yet none of those programs or group fitness classes (I’m talking to you, Zumba) take into account the unique history and dysfunction of our individual bodies.

Curiosity had overpowered me. Fatz had me flopping around with equipment, doing left- and right-sided movements, and basically confirming that I could not plank to save my life. She stood behind me in ominous silence writing down numbers. 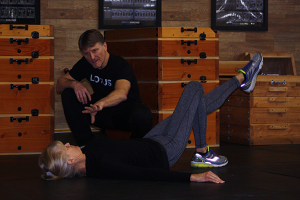 “Did I win? Am I the most flexible? I did that awesome, didn’t I?” The first thing I noticed about this approach is that there is not a lot of space for ego. This is a place for open curiosity. How do our bodies function? How could they function better? Apparently health is not a competition. Who knew? Suddenly I had a coach named Kevin sending me workouts with neat little video displays so I knew what the hell a Back-Bending Flying-Jane Dive With A Twist (one sided) was. I showed up at the gym and did the workouts. I knew there was some master plan these wise people understood, but I chose to remain oblivious. The assessment had made it clear that I am not of equal strength on both sides of my body and that my core was pathetic at best.

Within a few weeks, things changed. Fundamental, yet unexpected shifts were happening in my body. My gait on the stairs was more even. Complete, even motions in varied movements was palpable, like getting in and out of my car. Things that were not a noticeable struggle before improved visibly. My squatty Norwegian stride became a walk that would blend in on a crowded sidewalk. And I could do pushups. And planks. And an injury I’ve been battling for over a year began to diminish.

I wanted to not admit those things because it would mean a change of my current training belief system: Go as hard as you can for as long as you can until you cry or crash. But what is fitness? Is it excelling in a competition or single sport or is it aging gracefully? I don’t mean graceful like having better-than-Avon taste in perfume and jewelry. I mean moving with grace, poise, and health in an aging body. Leaving my ego at the door and setting my intention has been perhaps the most valuable gain from this exercise. I am less interested in what I can achieve in six weeks than what I’ll still be doing in six decades.

To find out more about LOTUS, their facilities, or their coaches, visit www.lotusfitdesign.com. //

Ammi Midstokke lives in Sandpoint, Idaho. When Ammi is not chasing her first love (trails), she is preaching her second (food) as a Nutritional Therapist. To find out more about saving the world with kale or the misadventures of a single mom, visit her website. View Website