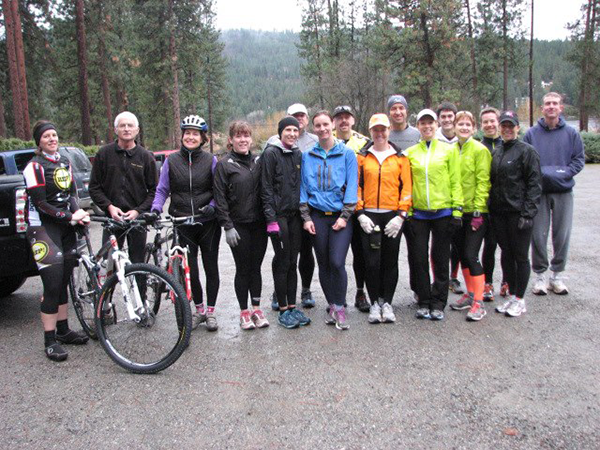 In spring 2012, I had raced a couple of trail runs on the west side, and I wanted to bring that energy to the Inland Northwest. I was looking for ways to help build the local trail running community, so I contacted the race director from the Orcas Island 25k, James Varner of Rainshadow Running. He recommended that I offer Fat Ass runs. I had heard of Fat Ass runs, and I decided to host one of these events at Liberty Lake County Park. This was the best advice I ever received. In fact, Trail Maniacs was built on this casual run, and as much as I love hosting all trail races, the Fat Ass run continues to be my favorite.

Many people wonder why I would call a run a “Fat Ass,” and some even think that I came up with that term myself. When we think of runners, we don’t typically think of big behinds. According to a March 1997 article in Ultrarunning Magazine, credit for the term “Fat Ass” goes to Joe Oakes of the San Francisco Bay Area. In 1978, Oakes was scrambling to find a Western States-qualifying race. He wanted to run a 50-mile race, but the only event of that distance that he found was a seven-person relay race along Highway 1. The race organizers would not allow him to run the race solo, so he signed up as seven different runners: Joseph Oakes, Jay Oakes, J Oakes — you get the picture. He enjoyed his prank, and he knew his ultrarunnning friends would love it too. The following year, Oakes revised his epic race, calling it the “Recover from the Holidays Fat Ass 50,” staging it as an unofficial adventure run. Back then, opportunities for running in ultras were few and far between. This was Oakes’ way to give his ultrarunner friends a chance to enjoy a cool run and work off the consequences of their holiday eating.

Fat Ass runs are free, no-frills runs that are all about the run and the social aspect of running. The Fat Ass motto is “No fees, no awards, no aid, no wimps.” Since our first Fat Ass run in 2012, Trail Maniacs has offered many more, showcasing some of the best trails in the Inland Northwest. // (Dave Dutro)

Dave Dutro is an avid trail runner, mountain biker, hiker, and co-founder of the Trail Maniacs. He wrote about dressing for winter trail running in October.