A Brief History of Skinny Skis: The Evolution of Cross-Country Ski Gear 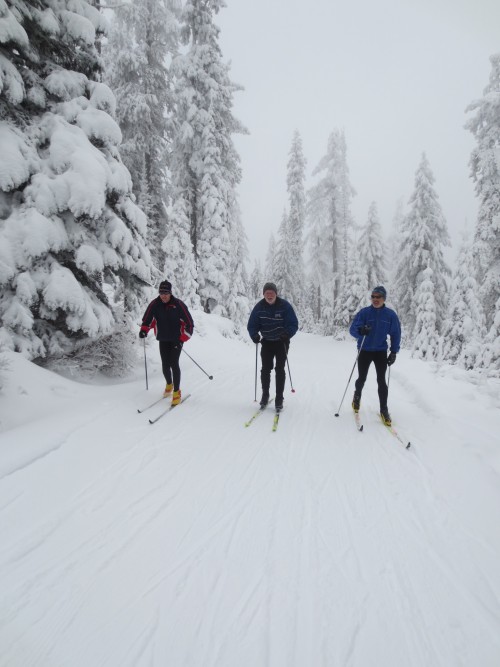 Like most outdoor fitness activities, there is a dizzying array of gear available for both the classic and skate styles of Nordic (cross-country) skiing. Waxable or no-wax skis. At least three unique binding and boot systems. Poles that range in price from $20 to $1,000. This volume of options isn’t remarkable in our day of hi-tech outdoor gear. What’s remarkable is that all this technology is such a recent phenomenon.

Skiing’s origins date back 7,000 years to Scandinavia. For the 6,900 years to follow, there was no distinction between alpine (downhill), backcountry or Nordic (cross-country). It was all just skiing. Cross-land travel was accomplished with a shuffling motion, the foot fixed to the ski.

A few key developments in the 19th and 20th Centuries pushed the evolution of the cross-country ski. The first was the invention, in 1850, of the cambered ski in the Telemark region of Norway. By moving from a flat ski to one with an arc in the middle, the skier’s weight was distributed evenly across the surface, allowing for a lighter and more maneuverable ski with better shock absorption. In the late 1800s, the process of laminating thin layers of wood led to even stronger and lighter skis.

Around the same time, Norwegian skier Sonder Norheim invented a binding with two parts: a leather strap over the top of the toes and a second strap that wound from one side of the front of the foot around the back of the ankle to the other side of the foot. This kept the boot fixed at the toe while the heel could rise. The result was a move from shuffling to a kick-and-glide motion.

Then in 1927, skier Bror With created the Rottefella binding, which did away with the need for a heel strap by fixing the front of the boot to the ski using a three-pin front binding fixed to the boot through three holes drilled in the sole.

But in post-World War II America, cross-country skiing was still in its nascent stages. Art Bookstrom, a fixture on the Mt. Spokane ski trails, remembers those days well. “Since my dad was Scandinavian, he wanted to get me into cross-country skiing when I was in junior high. But the only gear we could get was Army surplus. He bought me a pair, planed them down narrow, and those were my skis.”

“Back then, we couldn’t get ski boots or bindings,” he says. “So people would do whatever they could. One guy came up with a door hinge binding. He screwed one side of the hinge to the ski, with the bolt to the front. Then the other side was screwed to the sole under the toes. That way the heel could rise with each stride. To take the boot off the binding, you had to remove the pin that held the hinge together.”

Bookstrom recalls that poles were bamboo, with big baskets that he says “were good for deep snow, but when you were really striding and gliding, a ski tip could go through the ring of the basket, and that would throw you down and tie you up before you knew what happened.”

Fellow Spokane skier Lew Persons has also lived through the development of cross-country ski gear over the decades. When skating became popular in the 1980s, he recalls converting classic cross-country skis to skate skis by cutting six inches off the high front tips of the skis.

Persons also remembers how fragile the aluminum poles were in the 1960s and early 1970s, before the advent of carbon-fiber alloys and Kevlar wrappings. “One of my first races was at Squaw Valley. The biggest problem was skiers stepping on each other’s poles as they came off the starting line. It was pretty common to see skiers with one full pole and one two-footer dangling from their wrist.”

The type of edges on skis was also a critical development. Back in Bookstrom’s racing days, the skis only had wood edges that gave no control on icy trails. “I remember one race with 150 starters and only six finishers. The rest of them broke skis when they lost an edge and wiped out. And by the end, the ice had worn my skies, so they were rounded on the bottom, and I had to get a new pair.”

Both Persons and Bookstrom point out that perhaps the biggest step in the evolution of Nordic skiing was not the gear, but grooming. Bookstrom says that in the early days before snowmobiles were used to pull narrow groomers, “grooming consisted of breaking track with skis or snowshoes, and then wearing it in by skiing it. Skating only worked on corners that got widened by traffic, or after a thaw, when the snow outside the track got melted, smoothed and re-frozen.”

According to Persons, the advent of large grooming machines allowed trails as wide as 20 feet or more. “This meant that even with double tracks on both sides of the trail, there was a substantial space of firm, compressed, flattened snow between the tracks [that] allowed room to skate, making skating out of the track possible for the first time.”

As Nordic skiing gained in popularity in the 1980s, the technology kept pace. Today, slapping on a pair of cross-country skis is a pretty straightforward affair. The most difficult part may be picking out the right pair at the sport shop. //