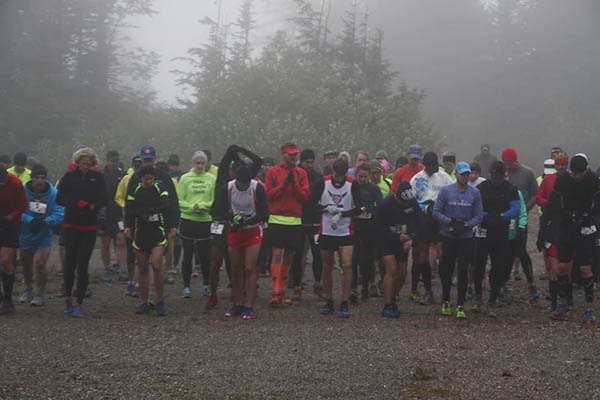 The fall morning chill comes a little earlier in the year when you’re at 4,500 feet elevation, which is where the Wild Moose Chase Trail Run is staged at the Selkirk Lodge on Mount Spokane. The event uses fun, challenging trails maintained by the Spokane Nordic Ski Association. Summer weather in Spokane often extends well into September, so when we parked and opened the doors, the cold mountain air made us second guess our bare arms and legs. The constant elevation gains and losses of trail running on a mountain warm you up right away though, so we happily shivered at the start line while we enjoyed the tradeoff of a sunny alpine morning. The Wild Moose Chase offers three distances: 5K, 10K, and 25K. The 5K has historically been the most popular of the distances, but race organizer Emma Lohr states that interest in the 25K has been growing steadily over the years. My running partner and I chose the middle distance and experienced beautiful, mostly forested trails that opened up a couple times to sunny meadows before ducking back into the trees. Friendly and supportive race volunteers stationed along the trails made sure that each runner stayed on course. The 10K course took an L-shaped loop over mostly single track trails that went from easy to moderate to difficult and back to moderate in steepness, and by the time we crossed the finish line, we were thankful that we’d resisted the urge to put on warmer layers at the start.

Since 2012, The Wild Moose Chase has operated as a fundraiser for second-year EWU Doctorate of Physical Therapy students to attend the annual conference of the American Physical Therapy Association, which provides students with an opportunity to learn about the latest research in their field and to network with PTs from all over the country. “Money raised from the Wild Moose Chase combined with other fundraisers has allowed every student to attend [the conference] who wanted to,” explains Lohr. In past years, The Wild Moose Chase has been a part of the Inland Northwest Trail Running Series. However, it is functioning as an independent race this year. “We are collaborating with some wonderful business sponsors,” Lohr says, “and we already have some great raffle contributions.” For more information, visit the Wild Moose Chase Trail Run page on Facebook. //

Janelle McCabe is a Jill-of-some-trades, master-of-none who writes about the Inland Northwest outdoor and active community. She wrote about the WunderWoman Triathlon and the Coeur d’Alene Scenic Challenge Triathlon in August.