Turning Your Yard Into a Natural Area 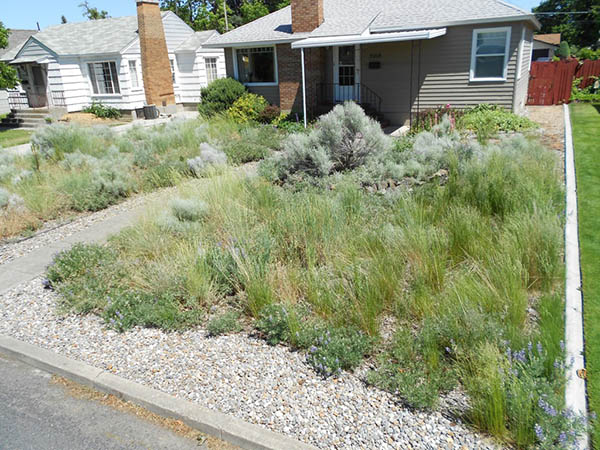 I was born and raised in Spokane and have lived most of my life here. Outdoor adventures, some of which led me to write a hiking guide covering Eastern Washington, have made me a big fan of the Inland Northwest landscape. My fondness for the “Inland Northwest look” gave me the idea to get rid of my lawn and put in indigenous plants to mimic the natural landscape. I didn’t know how much a landscaping company would charge for such work, but I figured it’d be a minimum of several thousand dollars. I’m not averse to monotonous grunt work, and with my frugal nature, I did all the work by myself over several days. I spent less than $100, most of which was gas money for the truck I borrowed.

I wanted the iconic, often-seen plants that are common in Eastern Washington, which aren’t normally carried at nurseries. I decided to get them for free by digging them up myself. It’s legal and permissible to get plants from property that is being developed or soon will be. In this way I got my plant stock without worrying about getting in trouble digging up a few plants. 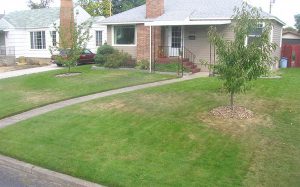 After removing the sod along my sidewalk and curb, I filled the area with river rock (free on Craigslist), which I loaded and hauled myself. The river rock created a border that would prevent plants from reaching into the street or blocking the sidewalk as they grew. I made mini-plateaus in the middle of my yard with the sod and ringed them with basalt from a housing development on Five Mile Prairie where a construction foreman said I could take as much as I wanted. During some of my many excursions at Riverside State Park, I noticed piles of wood chips left over from tree-thinning projects. I learned that I could help myself, but a free permit was required. I laid cardboard and newspaper atop the grass and hauled several truckloads of chips, creating a thick layer. The following year, a few spots of grass somehow got through, but they were easy to pull out.

I planted lots of bunch grasses and rabbitbrush. Oregon grapes, serviceberry bushes, sagebrush, and a couple more plants, the names of which I don’t know, also made it into my yard. A benefit of getting wood chips from the state park is that I unknowingly received lupine and ponderosa seeds. The following year, they sprouted without my help. My yard has several young ponderosas, and the purple lupines, so beautiful in late spring and early summer, are widespread. Another iconic flower, arrowleaf balsamroot, has too long a taproot to transplant. I collected seeds and tossed them throughout my yard. Though not as prolific as the lupines, several plants have taken root. 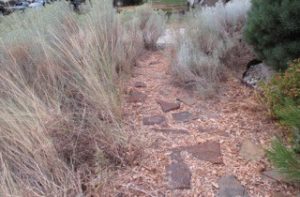 It has been several years since my lawn conversion, and the plants have multiplied, filling in the gaps and covering my yard completely so I don’t have to lay wood chips every few years to keep weeds out. I inspect my yard every two or three weeks and pull the occasional few that take root. The dominant rabbitbrush, which is common in the semi-arid Columbia Basin, flowers late in the summer and attracts hordes of honeybees. It makes my front yard look more like a Central Washington landscape than Eastern. As the ponderosas gain height, this will eventually change. I never water, fertilize, or mow, and I like how my yard looks. The only downside is that during windy weather, my plants catch litter instead of letting it tumble by. That’s okay, though. Any time I have to pick up litter, I award myself a gold star for a good deed done. // (Jim Johnson)