There aren’t many wild foods to collect in the dead of winter and virtually none that are fresh. The velvet foot, flammulina velutipes, is a rare exception. From late fall to early spring, this delicate looking but tough mushroom appears on deciduous trees. It can be wondrous to find, the only bit of life sprouting forth, often preserved for weeks in a state of frozen timelessness.

The cap is a burnt orange and viscid. The stem is wiry and dark velvet at the base. This mushroom you likely know but in a form so different it’s hard to believe it’s the same organism. If you’ve ever had thin white mushrooms in East Asian soup or wrapped in bacon, then you’ve eaten it. Named Enokitake by the Japanese, it’s grown in oxygen deprived darkness in jars where they’re squished together reaching to escape. They are the fifth most consumed fungi in the world and have been cultivated for well over 1,000 years. The natural form, also called the winter mushroom, is more flavorful with a less stringy texture. 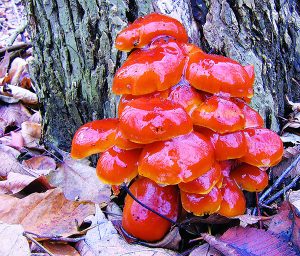 The velvet foot grows on dead sections of hardwood trees, in old wounds or the crotch of large limbs. Occasionally they appear to fruit from the ground on buried branches or stumps. You can also apparently grow flammulina in space, as NASA experimented with in the 90s during the D-2 Columbia mission. It worked, albeit in a catawampus manner, thus proving fungi’s upward growth is dependent on gravity. Flammulina velutipes is not difficult to cultivate but challenging in our region due to the dry climate. However, there is a growing interest amongst the permaculture community to overcome that barrier. This fall our city arborist, Jeff Perry, successfully fruited shiitake outdoors on some oak logs, a momentous feat.

Correct identification is simple December through February, as anything else would be reduced to dark mush in the cold. In November and March, caution should be exercised; there are numerous orange to brown mushrooms that grow on hardwood and some are deadly. So, double check with an expert and take a spore print, which means cutting a cap off and leaving it gill side down over night on paper covered by a protective dish. The next day it will have released a radiating cogwheel of spores on the paper. The color of this deposit is an identifying characteristic and fun exercise for all ages. In the case of the velvet foot, a white print separates it from the most toxic wood inhabiters, which have brown spores. When hunting clustered mushrooms, one can often “cheat” and find the color of the spores already fallen on the caps packed below. 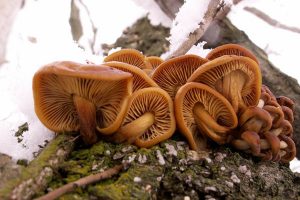 You’ll rarely come across more than a single fruiting of velvet foot, a thrilling discovery but not good for filling the pantry or freezer. The magic of chancing upon wild mushrooms is an ancient pleasure and this charming fungus will surely elicit such a response.

Identifying Attributes: Fruits in clusters during the winter on dead hardwood. The orange viscid cap sits atop a durable, dark-velvety-bottomed stem.

Cautionary Points:  Taking a spore print is a good idea when getting to know mushrooms; in this case it’s critical. The dangerous species in similar habitat have brown spores, not white.

Culinary Attributes: Cook whole due to the smaller size, maintaining the attractive shape. More refined in flavor than many earthy pungent varieties. Use in soups, as a garnish or in eggs.

Wine Pairings:  Any. This won’t be a large element of your dish. //

Kelly Chadwick grew up wandering the outdoors, which led to a lifelong passion for the natural sciences. He became immersed in mycology at 16, studying and teaching identification of fungi for 20 years, ran a wholesale wild mushroom business, and published "Decomposition, an anthology of mushroom poetry “ with his partner Renée. Currently he is an Arborist and owner of Spirit Pruners in Spokane, WA. Email him your wild edible questions: