The Grain Shed is where it’s at in the Perry District these days. The simple yet beautifully-designed store that opened this summer houses both a bakery (Culture Breads) and brewery (The Grain Shed Brewery). The head baker, Shaun, and his bakery crew arrive before sunup to bake modest and masterful loaves; Teddy and the brewery crew roll in around noon, checking on fermenting beer and beer levels. The brewery, bakery, and a Palouse farmer named Don form the Grain Shed Co-op. Together they use ancient grains that have higher-than-usual proteins to create flavorful and nutrient-dense goods. 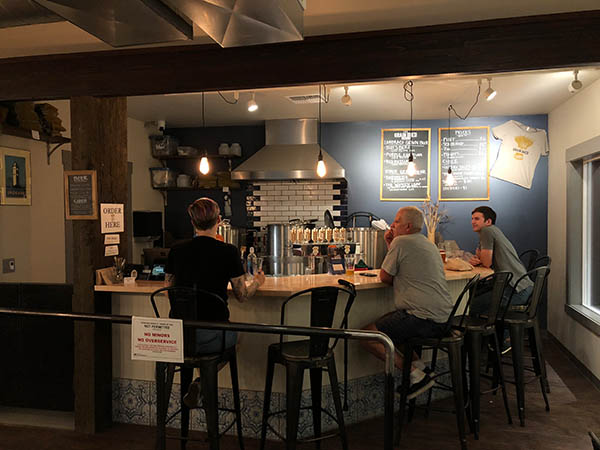 Sharing work space and grains between a brewery and bakery naturally led to crossover: the beer masters tinker with a beer called “The ‘Wasted’ Loaf,” their take on a Kvass-style beer, brewed with the leftover bread ends from the bakery. The beers are small batch, so favorites such as the Scot’s Bere will be in and out of availability as the crew works to craft the next barrel. Due to the unique grains they’re sourced from, these beers have a relatively low alcohol content. The grains are not large, plump, or sugary, but mineral and nutrient-dense, making for a good post-exercise pint.

The Grain Shed serves a limited menu throughout the day, from breakfast toast to grilled cheese sandwiches, made in the bakery’s hand-built, wood-fired oven. It’s a place that experiments, with pizzas on Mondays and the occasional Purple Egyptian malt pretzel. They offer spreads like Kefir-cultured fresh butter, made-from-scratch strawberry jam, and schug—a Middle Eastern herb sauce with a bit of spice. With a dog-friendly outdoor patio, The Grain Shed is the perfect place to refuel after an autumn run, hike, or ride. Follow them on Facebook to see all of their latest creations. //