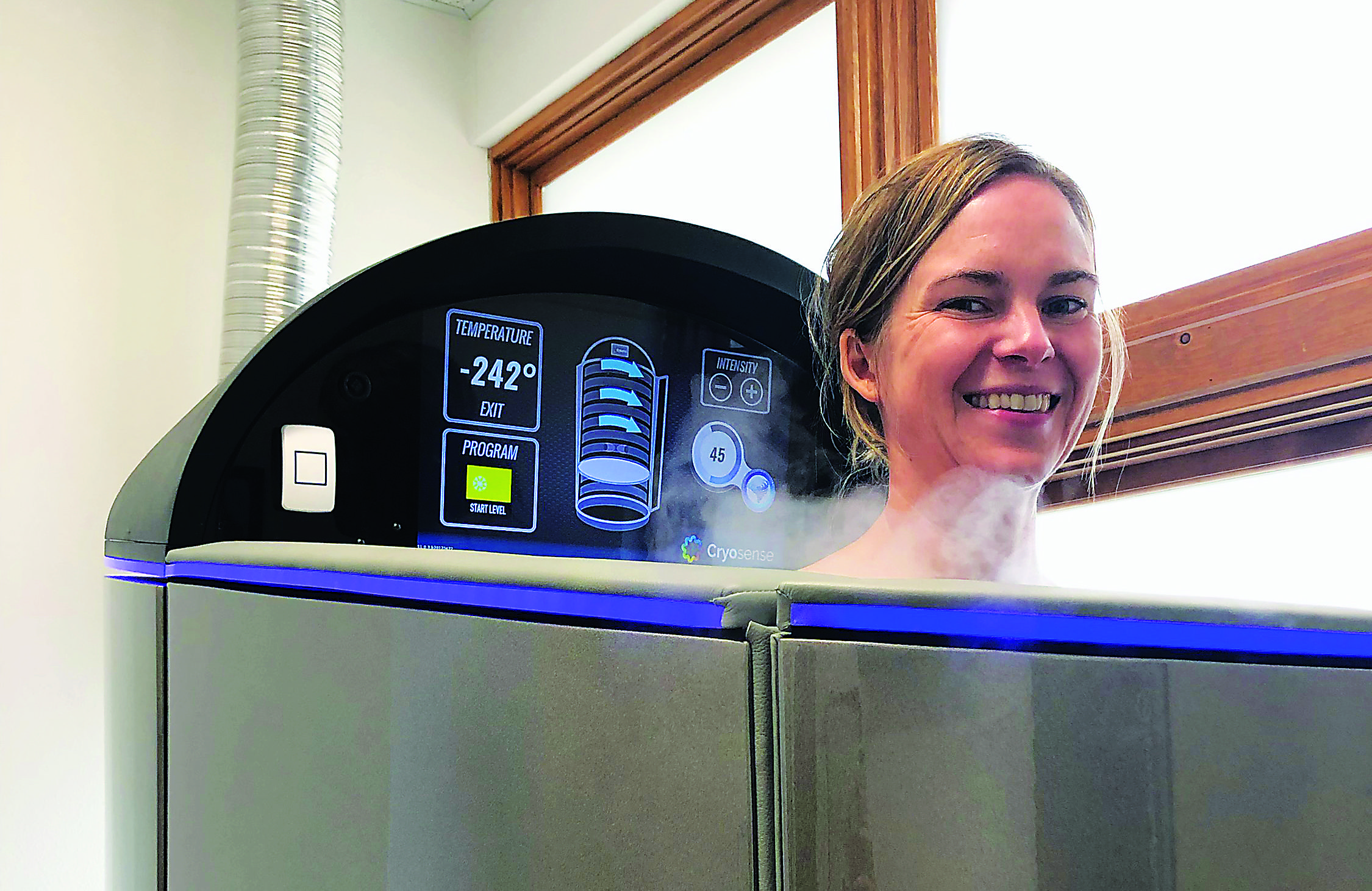 For most folks, being scantily clad in sub-freezing temperatures is far from desirable. With the exception of that strange breed of year-round shorts wearers (you know who you are), low temperatures are cause to bundle and protect.

Not so for proponents of whole body cryotherapy (WBC), where users enter a futuristic, sub-zero chamber with goals including reduced inflammation and faster post-workout recovery. WBC’s popularity has increased in recent years, earning favor with professional athletes including LeBron James, Floyd Mayweather, and Usain Bolt, celebrities like Jennifer Aniston, professional sports teams, and even the cast of Dancing with the Stars.

In WBC, the user enters a chamber cooled by liquid nitrogen and remains inside for up to three minutes, with temperatures ranging from 200 to 300 degrees below zero. The thinking is this: When subjected to extremely low temperatures, the body enters a pre-hypothermic state and blood concentrates in the core and vital organs. As a brochure provided by Spokane Nutrishop and Cryotherapy on the South Hill describes it, “During the 2-3 minute session, your blood short loops through your natural filtration system (heart, kidneys and liver) and removes toxins and inflammatory properties in the blood.” When the user walks out into a normal temperature, this nutrient-rich blood travels back throughout the body, speeding recovery.

Darrin Friberg, a trainer at Orange Theory on Spokane’s South Hill, goes in for HBC once or twice a week and recommends it to clients. “In the moment you’re like, the timer’s going down, dang, get this thing done,” he says, though that hasn’t stopped him from making it a regular habit. Outweighing the temporary discomfort, Friberg has found that WBC aids recovery and reduces post-workout soreness, getting people back to being active more quickly. “If it keeps you working out, there’s something to be said for that,” he says.

One person Friberg recommended cryotherapy to is Sarah Doxey, a Spokane runner who went in for a treatment with a friend, Laura Carey, just before the two of them traveled to Hawaii to run a marathon. “Definitely it’s a weird experience,” Doxey says. “You’re standing in a tube…you have to put on really thick socks, slippers and gloves…It’s not unbearable, but you’re just freezing,” Doxey says with a laugh. If you’re wondering how it feels, the general consensus is that it’s very, very cold, but not terribly uncomfortable, especially for such a short time.

Doxey had WBC recommended to her by both Friberg and her physical therapist; she’d been experiencing such bad calf strain leading up to her race that she couldn’t run for the two weeks beforehand. She’s not sure if it was the cryotheraphy session that made the difference, but the day of the marathon her calf didn’t bother her at all.

John Brumbaugh, the owner of the shop Doxey and Friberg visited, says regulars include people with psoriasis and arthritis, as well as athletes both amateur and professional, like Alyssa Hawley, a member of the 2019 Spartan Pro Team who comes in regularly for cryotherapy and treatment with the shop’s NormaTec boots. (Author’s note: these specialized full leg massage boots are amazing and should not be missed.) Cost for cryo followed by 30 minutes in the NormaTecs is $37. Spokane Nutrishop and Cryotherapy is the only Spokane location that offers both treatments.

Hawley began using cryotherapy this year. “As an athlete, I don’t want to take shortcuts; I think it comes down to taking care of your body as a whole—eating right, sleeping enough, rolling and stretching,” she says. “But because I have those things pretty dialed in, the cryo really just helps speed up the recovery process. Also, drawing an ice bath takes forever, and I am all about efficiency and my favorite thing is how quick and efficient cryo is!”

Prior to returning to the Inland Northwest a few years ago, shop owner Brumbaugh spent a decade in Huntington Beach, where WBC is much more prevalent. He chose the machine in his shop (CryoSense, made by CryoUSA) because of its safety features and because it starts with a heat cycle that opens up the vascular system before shifting to the cold cycle, which he finds to be even more beneficial. He recommends that folks come in once or twice per week for treatments.

Though it’s become more mainstream, it’s important to note that WBC has not been approved or regulated by the FDA, and its benefits are supported more by personal testimonials than conclusive scientific study. Consult with your physician before giving it a try. People who are pregnant, have heart conditions, or extreme cold sensitivity are among those who should not try cryotherapy.As for the rest of us, as Friberg put it to himself before his first session, “What the heck is there to lose?”