Ten Years Out There 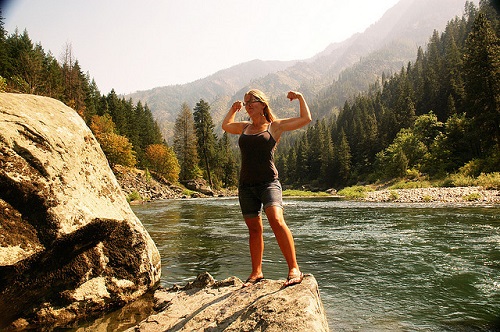 It’s hard to believe that Out There Monthly has been around for a decade. I had to round up a copy of the first issue and see it again for myself. Reading through those pages was like rummaging around a time capsule. And there was the proof – that ten years can really fly by, especially when you’re often outside having fun – right on the cover along with a whitewater kayaker: “DEBUT ISSUE! SEPT/04.”

I remember how excited many in the local outdoors community were as the first issues came rolling out. It was a kind of validation that we weren’t all totally crazy for calling Spokane home and loving it for the trails, ski hills, rivers, lakes, crags, and parks right in our backyard and the epic, world-class adventures within a few hours’ drive in any direction.

That excitement came pouring out like a river torrent in Out There Monthly Founder and Spokane City Councilman Jon Snyder’s first editorial. It’s a cool flashback to the times that set the stage for him to take the risk and launch a publication that we needed so badly, whether we all knew it at the time or not:

“How many conversations have you had that include the phrase ‘what’s wrong with Spokane is..,’ or ‘what Spokane really needs is….’ If you are like me, the answer is too darn many. I’ve lived in Spokane most of my life, and the town’s collective self-esteem problem can wear you down after a while. We are a lot more isolated than our big city neighbors to the West. Good ideas take a while to catch on here. Spokane does not suffer indifference gladly. If you want culture and activity here, you have to make it yourself – no one’s going to hand it to you on a silver platter, like they do in more cosmopolitan Northwest cities.

But that’s OK. It means Spokane breeds a heartier individual. If you’ve worked for years to organize anything from a bicycle club to a theater group, you are going to appreciate it all the more. Kudos to everyone who helped drag Spokane kicking and screaming into the 21st century. You know who you are. Pat yourself on the back because Spokane has turned the corner and the future looks bright.

In Spokane we are just a couple hours away from almost unlimited outdoor recreation opportunities. Whatever your favorite way to commune with nature, be it camping, hiking, swimming, cycling, boating, climbing, snowboarding, or bird watching, we have it in spades – and without the kind of pollution and overcrowding you see around bigger cities. Thanks to concerned citizens and a stalwart group of local environmental organizations and responsible companies, we still have a chance to avoid the nature destruction seen in other parts of the country.

Outdoor recreation is the key to Spokane’s future. Brisk job growth and economic development will only occur when more people get hooked on Spokane’s natural surroundings. I believe this so much that I started this magazine. Come with us as we endeavor to explore every unsung nook and cranny in the outdoor Inland Northwest. Our goal is to help you have more fun out there. Jon Snyder, Publisher and Editor-in-Chief.”

Snyder nailed it. That very first editorial and the entire issue reflected the surge of energy from a growing number of people who, at the time, were starting to come out of the woodwork bubbling with pride and acknowledging what Outside Magazine would later conclude. Spokane is a righteous, incredibly positioned and unpretentious outdoor town.

That first Out There Monthly cover story, “Downtown Kayak Park: Impossible Dream?” captured attention and got people excited too. It also stirred up the waters of local river politics a bit. Unfortunately, 10 years later, while Missoula is working on their second whitewater park to accommodate a surge in river-surfing stand up paddleboarders, a Spokane kayak park still feels too much like a nearly impossible dream.

Plans for a whitewater park on the Spokane may have stalled out for a while, but that section of river right below downtown where the park was proposed has transformed in dramatic ways since then. River floating and fishing, including trips led by several outfitters, has exploded. The Centennial Trail extension and new development along the north rim of the Spokane River gorge have created an access funnel that is luring more people to discover and explore the area’s mind-blowing patchwork of gorgeous public parkland and trails. And hopefully there will be another Out There Monthly cover that will hit the racks in the next 10 years with a kayaker or paddleboarder on it, celebrating Spokane’s first whitewater park somewhere on our awesome urban river. //