Teaching Kids How to Fly Fish

Everyone has a nostalgic story about how it all began. “I’ve been fishing my entire life but began fly fishing when I was 19 years old. I saw how much fun my father and his buddies were having and couldn’t say no,” says Josh Mills, who grew up in Spokane and is Wild Steelhead Coalition board member.

Now 37 years old and father of two sons, ages 7 and 4, he says, “My biggest tool for teaching my kids is exposure to the sport…and keeping it as fun as possible.” Most important, he advises, is allowing a child to learn at his or her own pace. “I’m trying my best to not force my hobbies on my children, but encourage them where I can to foster the ‘fun’ element,” he says. “That means not having to just fly fish, but to fish traditional gear at the lake and focus on a fishery that provides a ton of opportunity—anywhere there’s panfish, like perch and bluegills.” For general trout fishing season, Mills recommends Fishtrap, West Medical, and Williams Lakes. “Local lakes that are heavily stocked are often good bets to get a lot of action,” he says. 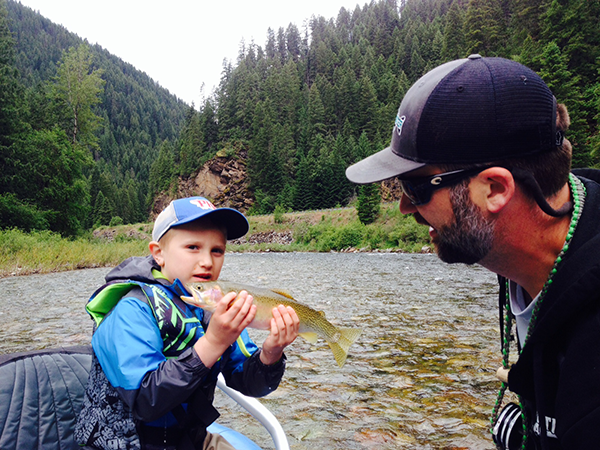 As for technical fly fishing instruction, Mills advises starting with “the basics of the cast.” For young children, Mills recommends using the Echo “Gecko” rod, made by a Portland-based company. He’s been using it with his sons. “It casts a normal fly line, but all the add-ons are made for smaller hands and physique,” he says. Echo’s Micro Practice Rod is another teaching tool he recommends. Kids can “easily practice in the house, park, or backyard and get exactly the same feeling as casting a real rod,” Mills says. “From a teaching perspective, it’s always going to be easier to try and cast a dry fly as opposed to a weighted nymph or streamer.” He suggests putting targets on the grass to increase the fun. For online help, Orvis provides instructional videos that focus on teaching children at howtoflyfish.orvis.com.

On the water, he teaches his kids “how to read the water, where fish live, and what to do when a fish hits,” Mills says. When fly fishing with his sons, for now, he typically does the casting but lets them “fight the fish when the take happens.” Perch, bluegill, bass, and similar species, according to Mills, provide good experiential-learning opportunities. “They are super aggressive and are more willing to hit a lot,” he says.

After a successful catch, “it’s about teaching respect for the fish,” says Mills. For catch-and-release, children need to be shown “how to safely handle the fish, revive it, and let it go.” For keeper fish, Mills teaches his sons how to quickly and humanely “put it down.”

Mills doesn’t want to overwhelm his young sons. “There’s more to it than just the fishing part. It’s a lot of fun to just turn over rocks and look at the bugs, and connect the relation between those bugs and the flies we’re using. Also, my sons can row our raft when it’s safe on the river. Keeping the trip well stocked in cookies and candy always helps!” As for his kids gaining proficiency in the sport, Mills is not concerned. “Casting a fly rod will come with age,” he says.  //

Spokane Kids Fishing Day (May 4): The 4th annual Spokane Kid’s Fishing Day at Clear Lake (west of Spokane near Cheney) is sponsored by the Inland Northwest Wildlife Council, Kalispel Tribe of Indians, Neis Family Memorial, and the Washington Department of Fish and Wildlife. Each participant gets to fish with help from seasoned anglers and take home a t-shirt and a rod and reel, included in the $10 per child cost (free for all current and former Ronald McDonald House kids and their families). Wdfw.wa.gov/fishing/youth.html

Klink’s Annual Fishing Derby (May 20): Klink’s Resort on Williams Lake south of Cheney, Wash. hosts this annual fishing contest with prizes going to the three biggest fish caught in adult and children’s divisions. Entry into the derby is $10 per person, and Klinks is a family-friendly resort with a restaurant, RV hookups, boat rentals, and fishing equipment and supplies for sale. All proceeds benefit Shriner’s Hospital for Children. Klinksresort.com

National Fishing and Boating Week (June 2-10): State fish and wildlife departments offer no-license Free Fishing Days for one or more days each year. In Idaho, it’s June 9 (always the second Saturday in June); in Washington, it’s that entire weekend, June 9-10; and in Montana, free fishing is during Father’s Day weekend, June 16-17. Check each state’s website for complete details. National Marina Day is also June 9 and a good time to explore a new lake or river. //

Amy S. McCaffree is special section editor and compiled the Family Outdoors & Summer Activity Guide for the April issue. She enjoys camping and hanging out along the river while her husband teaches their two children about fly fishing and catch-and-release.

Feature photo: Fly fishing lessons on the river with dad and grandpa. // Courtesy of Josh Mills