When many people hear the word “rodent,” they may cringe a little and think of infestation in their shed or the friend their cat brings home. But here in Spokane we have three of the larger rodents in North America—marmots, beavers, and porcupines—and all have helped shape our ecology and culture.

The order Rodentia make up about 40% of all mammal species and are present in almost every ecological niche, whether naturally occurring or introduced by humans. One characteristic of all rodents is their big, rust orange front teeth. These incisors are what allow rodents to be such good chewers, whether it is holes in the basement or cutting down cottonwood trees.

I have a strong connection to porcupine, Erethizon dorstatum, having tracked their movements along the Rio Grande in New Mexico. It is no easy task to put a radio collar around the neck of a muscular tube of quills that can weigh up to 40 lbs.

Due to their tendency to spend days and even months in the same tree, porcupines are one of the harder rodents to find. Evidence of their activity can be seen as road kill or in the snouts of dogs. However, they do leave traces of their activity as they wear down the bark of their favorite tree, creating a smooth climbing surface. Close inspection of these climbing trees will usually produce a hand full of quills stuck in the bark.

Porcupine’s 30,000 quills are modified types of hair that cover most of their bodies except their faces and bellies. These quills have a natural antibiotic that prevents porcupines from becoming infected when stuck with its own—or a mate’s—quills. Traditionally only hunted when other game was scares, the quills of porcupines have been used by many Native American tribes to adorn clothing, baskets, and aid in medicine. 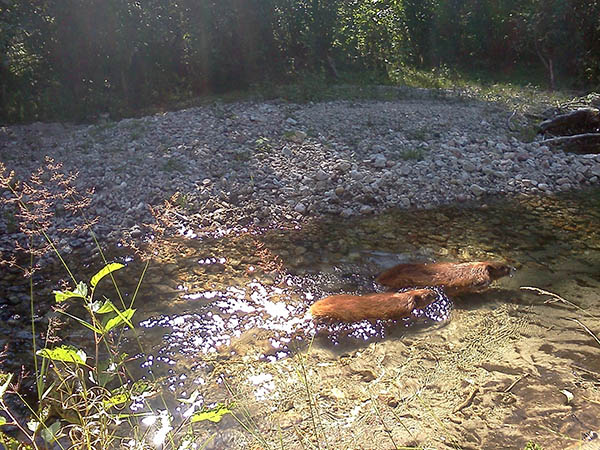 The many rivers and lakes in and around Spokane make for excellent beaver habit. Beavers, Caster canadensis, are the largest rodent in North America, weighing up to 70 lbs. They are slow moving when on land but agile swimmers and use that skill to evade predators.

Joe Cannon, who works on beaver-related issues with The Lands Council, has found that beavers are enjoying the nightlife downtown Spokane. During the high water periods of spring, beavers get stuck in the area between No-Li Brewery and the falls. The reservoir-like conditions allow access to food without the need to build dams, and the number of people helps keep predators away.

Beavers are also active along Hangman Creek, where they build dams during low water flows. These dams filter sediment and slow water flows, reducing erosion and creating wetland habitats. Sedges and rushes establish, which helps stabilize the riverbanks and create habitat for other species.

The city of Spokane might not exist without beavers. The Spokane House, which was the first European settlement, was established specifically for the trading of beaver pelts. Like other fur-bearing mammals, beaver were hunted to near extinction. Knowing their ecological benefits, there are now many efforts to reintroduce beaver to many western mountain rivers.

Although a bit smaller than porcupines and beavers, weighting in at 8 lbs, the yellow-bellied marmot, Marmota flaviventris, have a big presence in Spokane as the city’s de-facto mascot. Marmots, also known as rock chucks or whistle pigs, are a type of ground squirrel. Unlike porcupines and beavers, they are most active during the day, scurrying out of the way of bikers and runners along the Centennial Trail and South Hill Bluff trails.

Professor Elizabeth Addis of Gonzaga University suspects the high numbers of marmots are due to their lack of predators and access to food such as clover in manicured lawns. But these high numbers can cause them to be a nuisance. Marmots have been known to crawl under cars and chew on hoses. They burrow in landscaping and can eat hundreds of dollars worth of flowers and vegetables.

Professor Addis has found that some populations of Spokane’s marmots are lacking hair in spring. She has found that these marmots are succumbing to the gluttony of processed food such as chips that provide un-natural fats, leading to poor hibernation.

Marmots constant presence in the city has led to the likes of Marmot Music Fest, Marmot Beer Festival, and Marmot Art Space—in addition to marmot themed t-shirts, coffee mugs, and memes. Maybe with time, we will see similar respect for our other large rodents with a Porcupine-a-Palozza or Beavers Brews on the river.

[Feature photo: Marmot by the Spokane River by Summer Hess.]