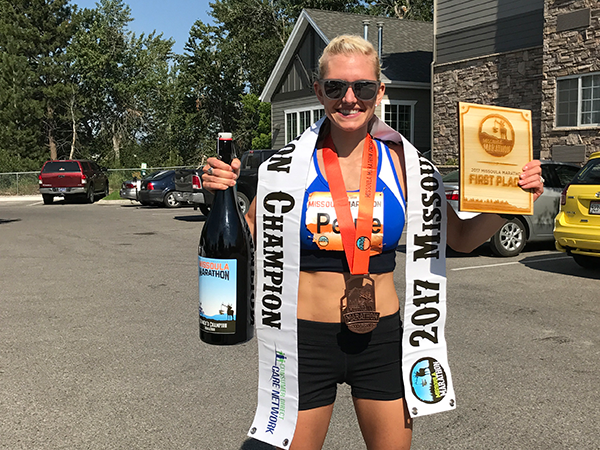 Apparently, the fifth time is a charm for local runner and coach Bryanna Petrie. She has consistently focused on winning the Missoula Marathon, and, in 2017, she eventually succeeded. “I have raced the Missoula nine times now, five times in the full and four times in the half marathon. I even ran it pregnant twice. It’s like Christmas in July for me, and it has become a family tradition,” says Petrie.

“The course crosses two different rivers. You get breathtaking views at the top of the only climb, and it’s shaded for the most part once you get into town and run through neighborhoods near the University of Montana,” she says. “Then you finish on the Higgins Street Bridge over the Clark Fork. There’s even fireworks at the start and the volunteers and spectators are all awesome.”

Petrie has her Masters in Human Nutrition (Certified Nutritionist), is a certified marathon coach, mother of two youngsters, and she coaches cross country at Mount Spokane High School. “I broke away from the top females at mile three because I felt the pace was too slow. I was a good 100 or 200 yards ahead of them around mile 10 according to my husband. I honestly don’t know at what point I told myself I got this. I didn’t know how far back the other females were, but it was getting harder for me to push. Finally, at mile 16, I started to feel confident,” she admits. This was her twelfth marathon overall, and she definitely plans to return to Missoula next year. //