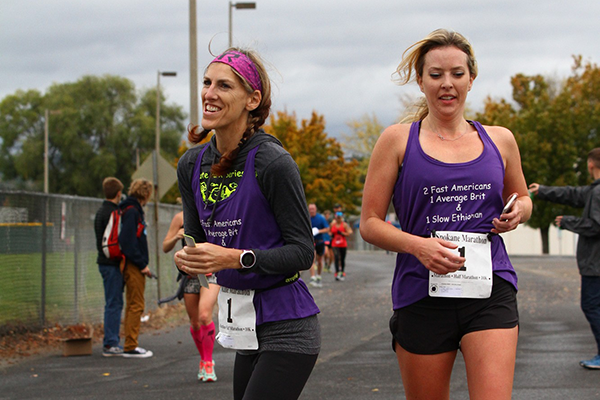 The Spokane Marathon organizers (the Bloomsday Road Runners Club) seem to have a sixth sense when it comes to scheduling this event. Without exception in the past several years, race morning has brought perfect running conditions: cool and sunny. At this point in the running season, many people are winding down their race schedule and are ready for less serious activities, which makes the relay option of the Spokane Marathon a great way to keep moving, but for a shorter distance. Teams of four runners compete in three divisions (women, men, and mixed), but the communal tailgating experience makes friends of many teams by the end of the race. Several teams wear matching shirts, hats, or costumes, and when the fourth runner crosses the finish line, everyone is so excited for post-race carb-loading on Papa Murphy’s pizza that they might forget to check how their team placed (which is probably just as well).

The four legs of the relay range in distance from 5.5 to 7.3 miles, and the course takes runners through Browne’s Addition, down the Centennial Trail, along the Spokane River, up Doomsday Hill, through Kendall Yards, and past the falls before ending in Riverfront Park. “Our out-of-town athletes are pleasantly surprised by the beauty and vibe of Spokane,” says race organizer Dori Whitford. “There’s a reason the Spokane slogan is ‘Near nature. Near perfect.’ And I think all the finishers are delighted with our race medal every year.” Whitford says that though the hilly course is challenging, it is less hard on the body than a race that is totally flat. “Working different muscles is a good thing! The secret is to train for the hills,” she says.

This is a hometown race. Twenty area high school cross-country teams volunteer for the event, helping with everything from bag check to finish line medals. They dress in costumes, line the course, and staff aid stations as they compete with each other to be voted Best Supporters by the runners. Spectator signs and chants are a fun part of any race, but fall races offer spectators the additional fodder of political campaigns and government missteps to fuel their sign-making creativity.

Runners have other distance options to choose from: a 10K (which is now an official qualifier for Bloomsday Second Seed), a half marathon (which is the most popular distance), and a full marathon (which takes the same course as the marathon relay). This year the Bloomsday Road Runners Club is partnering with Fleet Feet to put on a marathon training clinic. Thespokanemarathon.com. //