Spirit of a Mountain: Reflections on Skiing and Being Schweitzer 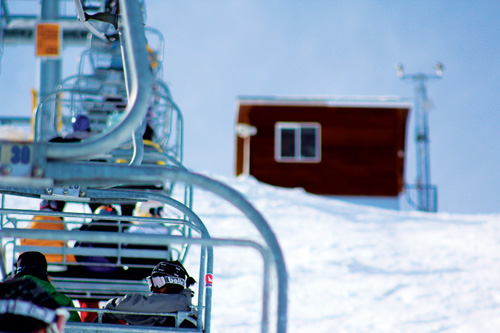 If Schweitzer has a spirit, you will find it deep among trees obscured by fog. It is there, in powder drifts that have retained their perfect looseness when the groomers have long since turned crusty.

If Schweitzer has a spirit, you can see it toasted in the village, in the chaotic dining halls and crowded, intimate pubs. If Schweitzer has a spirit, you can hear it in the triumphant wail of infants, set on skis and sent down the bunny hill in their first pizza formation. Because this, the billowing line between the trees, is what children practice for before they know it exists, and it is the tale of the après even long after the snow has gone.

With 2,900 acres, Schweitzer is the biggest ski resort for hundreds of miles in any direction, and it has won accolades for being some of the best tree skiing in the nation. In fact, in 2007, Skiing Magazine’s reader resort survey dubbed it number three for tree skiing. About half of Schweitzer’s terrain is in the trees, some wide-spaced and forgiving, some so tight that none but the most advanced can hope to navigate unscathed – or at least without falling over in the occasional panicked stop. The 2005 addition of the Idyl-Our T-bar expanded the resort’s glade terrain and sidecountry skiing significantly, and the runs off the T-bar, which is a little out of the way and a bit tricky for beginners, are favorites for people trying to avoid the crowds. Partially because of this, Schweitzer also earned accolades in 2008 for being the “Best Place to Ditch the Crowds,” according to Skiing Magazine.

Because the resort is often overcast, often windy and always variable, the trees offer a measure of protection from the elements. Trees keep fresh snow safe, tucked away in micro-climate pockets. They also keep it safe from the marauding advances of those whose skills are not as honed. “Schweitzer has loads of great terrain that is just hard enough to access that the properly motivated can find fresh lines for days after the latest snow,” says Nathan Harrell, a 33-year-old optometrist who has used his yearly passes extensively since he moved to Sandpoint in the summer of 2010.

Schweitzer has many things to offer tourists and newbies, from the theme-park feel of Stella, the high-speed six-pack lift serving the back of the mountain, to friendly and faithful ski instructors. It caters to competition hopefuls, with Schweitzer Alpine Racing School, and to trick junkies, whose terrain parks will be expanded this winter with Southside Progression Park, part of the $1 million the resort spent to upgrade and maintain itself this summer and fall. In short, the mountain draws a variety of skill levels, ages and interests. But at its core, its personality reflects the locals, the die-hards, the people who save up to buy a ski pass, often as early as May of the previous year when prices are lowest, and then arrange their work schedules so they can spend as much time as possible hunting powder in the trees from late November into early April. In late November they will likely be using their older gear, since it takes a month or so for the snowpack to allow for debris-free cruising. At 6,400 feet, the summit may offer better snow conditions early on than will be found at the lower elevations, but that changes depending on the day and even the hour.

Many locals have been coming to the resort for decades with their families. Sandy Compton of Heron, Montana, began skiing there in 1990, along with his niece Melissa Compton, who was then in fifth grade. Both of them still get season passes every year. “I was spoiled to grow up with such an amazing mountain,” says Melissa, who praised the runs and the lack of lines. “I’ve been to other resorts and nothing has measured up.”

Sandy has spent many of the past 23 winters skiing with his nieces, his nephew, his brothers and their various friends. He still spends time on the slopes with his family, but he also will go solo in search of fresh lines. “The thing I like most about Schweitzer is that on the busiest day, I can find someplace to ski by myself,” he says.

This year, Schweitzer celebrates its 50th anniversary. December 14, the resort will offer $19.63 lift tickets – a nod to the year 1963, when it opened its first chairlift – and an after-party at Taps bar where a 25-year-old time capsule will be opened.

Katie Botkin is a freelance writer and the managing editor of MultiLingual magazine. She has a Master’s degree in English and undergraduate degrees in French and journalism.