Skiing with Your Dog: Give Skijoring a Try with These Tips for Beginners 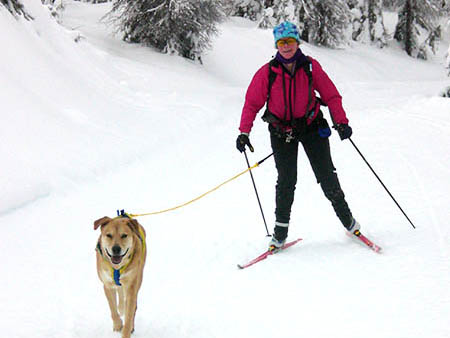 My four-legged friends have always been my best training partners for athletic pursuits. I have never had a dog bow out of a planned activity at the last minute due to bad weather or vague personal reasons, and on several occasions my dogs have prevented me from skipping a training day. Who can say no to that look from an eager pup?

It’s easy to take a dog for a hike or a run in the summer, but when winter arrives and the best trails have a thick layer of ice, it takes extra effort to take a dog on a quality adventure. That’s where skijoring comes in, where the human goes on cross-country skis and the dog pulls with wild abandon. With an initial investment in proper equipment and a little research about the best places to play, most dogs can quickly get in touch with their inner sled dog. Don’t assume your dog won’t take to it because they don’t look like an Iditarod champion. I have seen successful skijor dogs that ran the gamut from short-legged basset hounds to huge St. Bernards, along with all kinds of mixed breeds. Do invest in quality skijor equipment, as none of the local ski trails allow off-leash dogs.

The only real requirement for a good skijor dog includes being friendly, both with strange humans and with strange dogs. That’s not to say the dog should approach all; most skijor dogs are trained with the command “on by,” meaning it’s impolite to stop in the middle of the trail to sniff noses. Dogs that are aggressive or fearful of other skijor teams approaching at a high rate of speed will need some additional training before they should be out on the ski trails. 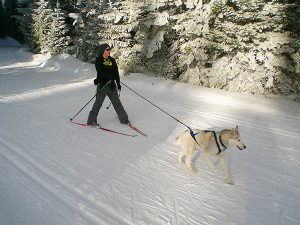 It helps if your pup likes to pull, which might be confusing for a dog that has been trained to not pull when on walks. I have found that my dog knows the difference between his harness (designed for pulling comfort when the human encourages more speed) and his collar (which makes pulling feel uncomfortable, plus the human says “heel”). Don’t try to skijor with your dog’s usual collar and leash, as this can cause injury. I purchased my skijor kit from Howling Dog Alaska, a company that caters to sled dog teams. There are other similar companies, but the main thing to keep in mind when choosing which equipment to invest in is to get a harness designed for pulling (as opposed to walking harnesses, which have no extra padding) and a leash that has an integrated bungee cord. The bungee helps protect the dog when its human inevitably crashes and some stretch is needed to lessen the shock of the sudden stop. If you’d like to try before you buy, skijor equipment rentals are available through Fitness Fanatics at Mt. Spokane’s Selkirk Lodge on Sundays.

The most important consideration for skijoring is the dog owner’s responsibility to clean up any messes. Nothing makes other skiers angry faster than seeing “brown klister” on the skate deck. Double bag any doggie deposits and carry them with you immediately, as bagged poo should never be left alongside a trail. Other incidentals to pack include booties for your dog’s feet to help prevent snow buildup, water and a collapsible water bowl, and some dog treats. For the best workout for both human and dog, use skate skis. Classic skis work well for a slower tour.