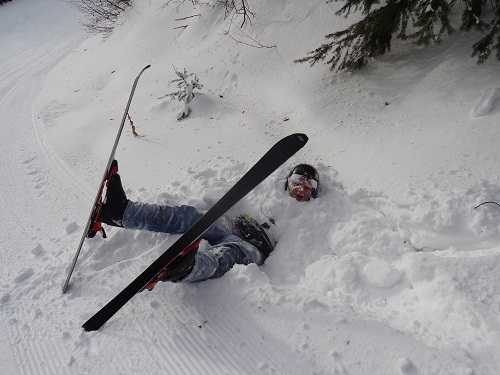 If you have spent any amount of time in the mountains during winter, chances are good you have experienced mountain karma. You know, that unseen force that measures your actions and can easily put a smile on your face and make your whole day on the hill simply awesome or give you a swift kick in the nuts and make you wish you joined that men’s over-40 indoor badminton league rather than going skiing. Yeah, that karma.

I have to admit I have been on the receiving end of some bad mountain karma over the years, probably due to my poking fun at some poor soul as he/she hacked their way down a run they had no business being on, or for any number of comments made in poor taste. While reflecting on my past transgressions, I have realized that there are actually three levels of mountain karma: The Good, the Bad and the Ugly. If you can identify with more of the Bad or Ugly than the Good, it might be a good time to follow the advice of the lyrical sage Ice Cube and “check yourself before your wreck yourself.” Karma can be a real bitch.

The Good: While entering the men’s restroom, you hold the door for the chap who obviously has never worn or walked in ski boots across a urine-slicked floor. He later buys you a pitcher of Black Butte Porter.

The Bad: You shove past the gent discussed above, cut the line to the urinal, and proceed to pee down the front of your brand-new, bright blue Spyder ski pants you received for Christmas. Snickering follows you as you exit.

The Ugly: Same as above, but as you turn to leave in a hurry, you slip and fall face down in a puddle of what you thought was water. It’s not. You never do get that smell out of your pants and jacket or your nose.

The Good: After witnessing a wicked tumble by a hot twenty-something female skier, you stop and help her collect her gear. You later meet up for some apres-ski beverages, and she gives you her number.

The Bad: You spray snow on the aforementioned skier as you fly by, then proceed to catch an edge. The ensuing yard sale is classified as “epic,” with a debris field that is nearly 200 yards long and can be seen from space.

The Ugly: You do eventually come to a stop, but one of your skis doesn’t. It was last seen going airborne into a stand of trees and is not located by Ski Patrol until the following July. You swear you heard laughter on the voice mail they left.

The Good: As a single in a long lift line, you step aside and let a nice older couple load in front of you. They comment that maybe this younger generation isn’t as bad as Fox News says it is.

The Bad: You duck under the ropes, cut the line, and jump on the chair, giving the finger to the lift operator. While unloading, your pole strap gets caught, and you end up going around the bullwheel, stopping the chair for 20 minutes. Your pass gets pulled immediately.

The Ugly: Your little escapade causes the chair to derail. After sitting for over an hour, you suddenly become very aware that eating the Mucho Grande Fiery Diablo Nachos for lunch was a poor decision on your part. Your pass still gets pulled, and you never do wear those pants again. //