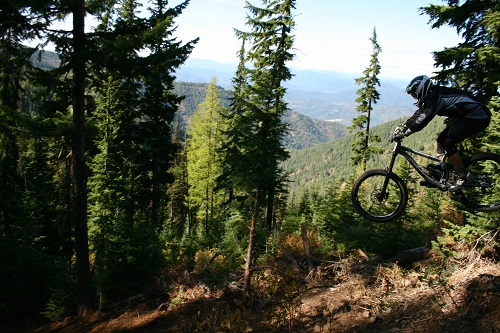 Riders from around the region voted Silver Mountain as the “Top Bike Park in the Northwest” in 2014 in the second annual Best Bike Parks survey conducted by MTBparks.com, an online guide to mountain biking resorts across the continent. Over 3,000 people participated in the survey, which moved Silver Mountain up from the number four spot in 2013.

“We are excited to have earned the top spot in our region,” says Willy Bartlett, Silver Mountain’s Marketing Coordinator and an avid rider. “We have come a long way in the last two years, but we see this as the foundation for our future plans. We have been working hard to ensure that Silver Mountain Bike Park continues to grow and encourages riders of all abilities to try out lift-served mountain biking.”

In 2014, Silver Mountain Bike Park built three new trails and continued to rebuild its existing network, bringing trails up to modern bike park standards. With improvements like new rental bikes, ladies rides, a fun downhill race series and fresh trails, mountain bikers have been traveling from great distances to get a taste of what’s new in Idaho’s Silver Valley. Improvements in the works for 2015 include expanding to seven-day-a-week operations, adding mountain bike instruction, hosting a race in the Northwest’s biggest downhill series and continuing to expand on the 35 trails that already exist. Riders will want to check out Snaggletooth, a new trail built this spring, as well as the rebuilt upper Hammer. A glance at the new trail maps will also reveal a new black diamond trail slated for opening later in the 2015 season.

Silver opened early for one weekend only over the Memorial weekend holiday, and the full opening of summer operations is set for June 13. More info: Silvermt.com/Summer/Mountain-Biking. //