Go Skydiving — There’s No Excuse Not To

Wind and adrenaline whipped around my body as I watched, helpless, as my girlfriend jumped out of our plane and into…. Nothing. 12,500 feet of nothing between her and the ground. I was sure she was scared. I was scared. But I soon forgot about that as I found myself at the door looking down. I shivered. Partly due to the cold of the air at that altitude, but mostly because of what I was about to do – jump out of a perfectly good plane. Thankfully, I was shoved out by Rogers, my Tandem Master, without more time to consider my decision.

For the first few indistinguishable moments, terror took hold of me and I screamed. I had told myself I wouldn’t, but there I was, screaming like a banshee. A terrified, irrational, animalistic and purely instinctual banshee. But then the adrenaline kicked in. I loved it. I yelled at the fast approaching ground, daring it to come and get me. Even though the fear had passed, rational thought had yet to return. After what seemed like forever, Rogers pulled the parachute and we jolted to a more reasonable speed and I had time to form rational thoughts. I took in the exquisite view of the patchwork of farmland that makes up eastern Washington. He let me steer the parachute, occasionally going into a terrifying yet exhilarating downward spiral. 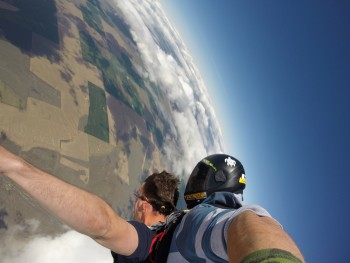 Eventually we landed softly on our butts, right on the patch of green grass we had aimed for next to the airplane hangar that acts as the headquarters for West Plains Skydiving. I couldn’t believe how easy it had been to have this experience. “We really take care of just about everything for you,” says Kara Kruse, the scheduling manager and a member of the founding family of West Plains Skydiving. And that’s no lie; all you do is show up and get harnessed. “Then we get you in a plane, take you up to 13,000 feet, and kick you out!” She laughs.

The cost of the experience is only $205 (plus tax) on a Thursday or Monday, and $225 (plus tax) on Fridays, Saturdays, and Sundays. That, a waiver, and 10 minutes of instruction was all it took to jump out of a plane with a certified instructor. After 15 minutes in a small plane, you get 45-55 seconds of freefall for 6,000 feet and several minutes floating down to earth with the best view of eastern Washington that money can buy.

Safety wise, Kruse says that as long as you’re at least 18 and generally in good health, they can take you skydiving. There are some basic health considerations which you can find on their site, but you don’t have to be a Spartan to skydive. West Plains have taken jumpers who are paraplegic, claustrophobic, terrified of heights…. You name it. Even a 92 year old woman who had to have the photographer hold her teeth before the jump! “There’s really no good excuse not to go,” Kruse says. “Skydiving multiple times isn’t for everybody,” she acknowledges. “But jumping once with a highly certified, trained instructor, really is,” and I cannot agree more. Everyone should try it at least once. Whatever you’re doing, stop it now, and go to skydivewestplains.com or call Kara at 509-838-JUMP to schedule your trip for sometime this summer. You won’t regret it. // 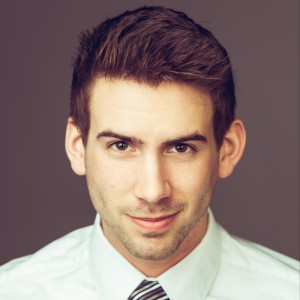